I volunteer helping patrons in the Library of the York County Heritage Trust. Last week I was returning items to the collections and noticed this photo on the top of a pile of recently donated photographs. My immediate reaction, ‘I know that garage.’ I looked at the back of the photo; it contained no identification, however I was convinced it was the Square Deal Garage from about the 1950s.

The Square Deal Garage still stands at 2181 South Queen Street in York Township. This ‘Now’ photo confirms my identification of the donated photograph.

Through the third grade, during the 1950s, my school bus stop was nearly across the street from the Square Deal Garage. In fact, the school bus at the right side of the donated photo could very well be the school bus that took me to and from York Township Elementary School in Spry.

Kervin W. Butcher established the Square Deal Garage; everybody called him ‘K. W.’ However, auto repair was not his first calling, for through the 1920s, K. W. received steady employment as a factory worker; utilizing the trolley that went through Spry to work at the American Chain plant on East Princess Street in York.

As a result of the Great Depression, his work hours were cut back at American Chain. K. W. started repairing cars to supplement his income; first at the rear of his home, at 2421 South Queen Street. As demand for his auto repair work grew, he rented several facilities in Spry before establishing a garage on the northwest corner of South Queen Street and Dewdrop Road during 1939. At that time, K. W.’s son W. Ray Butcher started working at the 2266 South Queen Street garage as a full time mechanic.

W. Ray Butcher served during WWII, and upon his discharge, K. W. felt a larger garage was needed. The new garage at 2181 South Queen Street was built and opened on July 5, 1946; it is the garage that still stands today. In conjunction with the 1946 opening of the new garage, Kervin W. Butcher and William Ray Butcher legally assumed the name Square Deal Garage.

The old garage at 2266 South Queen Street was sold to Spurgeon and Louise Gingerich; where they established Spurg’s Drive-In. Spurg’s was most recently known as Nicks Diner before being demolished a short time ago for future development of that corner in Spry.

The following, ‘Then and Now’ aerial views show the Square Deal Garage surroundings during 1957 and 2014. Both of these views are looking eastward. The 1957 aerial photo comes from the historic aerial photo collections available on the Penn Pilot web site; actual date of the photo is September 5, 1957. A comparable Bing.com Birds Eye Aerial View is from 2014; or a year earlier, when the former Lincoln-Mercury Auto Dealership still stood in that area. 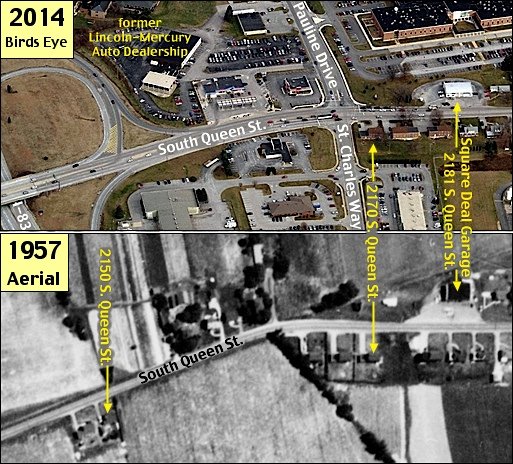 I’ve pointed out the ‘Then and Now’ locations of the Square Deal Garage and houses along South Queen Street. Today the Square Deal Garage pretty much is in the front yard of York County School of Technology. Today the 2170 South Queen house is on the corner of South Queen Street and St. Charles Way, however in 1957, there were two more houses heading north out of Spry before the kink in the road, which aligned with the hedge-row separating the row of Spry houses from the open fields of York Township.