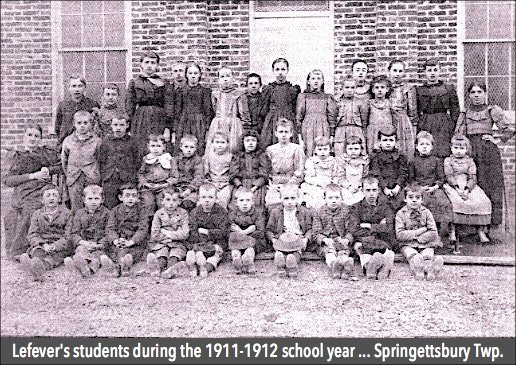 The last of 21 York County townships to form, via dividing up the land of an existing township, was Springettsbury Township in 1891; by carving 16.38-Square Miles out of Spring Garden Township; north and east of Mill Creek. This post looks at why and how Springettsbury Township came into existence, plus a look at aspects of its early history.

The introductory photo shows Lefever’s One-Room School students during the 1911-1912 school year. Torn down shortly thereafter, that schoolhouse was located along the east side of the present Haines Road, just south of Eastern Boulevard. In 1912, Lefever’s was the focal point of major changes in schooling within Springettsbury Township. After other facets of early township history are explored; the Lefever’s story will be disclosed.

Background on Formation and Division of Spring Garden Township

Spring Garden Township, itself, had been established in 1821, by carving 24.74-Square Miles from parts of Hellam Township and York Township; two of the large original townships, in existence during 1749, when York County was carved out of the Lancaster County lands west of the Susquehanna River.

Serious overtures about Spring Garden Township being divided into several townships arose in 1890. One of the issues was the single polling location within all of Spring Garden. It was located in the heart of Freystown, just east of York City; at the Public House of Reuben Doll, and commonly known as the Spring Garden Hotel.

The talk of division came from two directions; in the distant northeast and distant southwest areas of Spring Garden Township. These areas had repeatedly requested polling locations in their areas; however those requests fell on deaf ears to a governing body almost exclusively made up of and representing Freystown residents.

Those outlying areas repeatedly had no success in getting any of their people elected to positions in the township. There were claims of unequal taxation for roads and schools. Those became primary issues in the Petitions for Division; made to the Court of Quarter Sessions of the County of York.

There was a 47% turnout for the special election, where the results revealed; 597 voted FOR Division, and 42 voted AGAINST Division. Those results were made official at the next Court of Quarter Sessions, with a Decree of Division on April 20, 1891; thus establishing Springettsbury Township. Springettsbury Township encompassed 16.38-square-miles and Spring Garden Township was reduced to 8.36-square-miles.

In 1892, the people in the southwest area of Spring Garden Township submitted a Petition of Division. However in an attempt to neutralize the issue of distance to polling places, Spring Garden Township had established three precincts, with three polling places in their reduced size 8.36-square-mile township. There was a 54% turnout for that special election, where the results revealed; 220 voted FOR Division, and 262 voted AGAINST Division. Thus negating the attempt to create the 22nd new township in York County. If the majority had been For Division, WEBB Township, would have carved an additional 6.26-Square Miles from Spring Garden Township.

During the initial two decades of Springettsbury’s existence, there were three Township Supervisors, elected directly by the voters in the township. From 1891 until 1912, the supervisors were mainly in charge of maintaining the roads and bridges; not already under the control of York County or a Toll Road organization.

The supervisors adopted budgets and levied taxes to maintain the roads and bridges under their control. They were in charge of hiring workmen and procuring materials and equipment to do that work.

These supervisors might also be involved in handling boundary disputes and conflicts over such items as placement of fences. These types of issues often resulted in the earliest ordinances enacted by Township Supervisors.

Springettsbury Township had two local Post Offices in its early years. Situated in the village of Pleasureville was the Springet Post Office. It was in existence from November 28, 1891 until it closed November 30, 1908. During those 17 years, the residents in the whole northwest region of Springettsbury Township traveled to that post office, setup in the corner of various Pleasureville stores, to pick up and drop off their mail. This local Post Office closed when Rural Free Delivery, out of the York Post Office, became available to this area in December of 1908.

Situated in the Stony Brook area; the initial local Post Office was called Turnpike. It existed from October 19, 1877 until March 2, 1882, when the Post Office name was changed to Stony Brook, which was the new name for the village. Stony Brook Post Office closed March 15, 1914. After that date, Rural Free Delivery, out of the York Post Office, became available to the southeastern area of Springettsbury Township.

The Postmasters for these local Post Offices were generally owners of stores in those communities. Every few years, a new local Postmaster was appointed, after which the Post Office Cabinets were often moved to a corner of the business associated with the new Postmaster.

In 1891 the school term was only 6-months in Spring Garden Township (October through March) and the students were already out of school when the changeover to Springettsbury Township occurred. The new School Board had several months to prepare for the 1891-1892 school year.

Most functions of the early School Boards of Springettsbury Township are directly reported in Newspaper articles of that era. Other functions were discovered via interviews of School Board members throughout Pennsylvania; per a 1923 dissertation in the holdings of The Pennsylvania State College.

Township School Boards were elected positions; Springettsbury began with six board members. They adopted budgets and levied local taxes, per State mandates, in order to gain a State appropriation. They were the final say in operating the school system within their township.

Usually in June of every year, School Boards fix the length of the upcoming school year and set teacher salaries. In Springettsbury Township, the school year and salaries started off by remaining the same as those in Spring Garden Township. Going into their second school year, i.e. 1892-1893, they increased salaries one dollar. And as shown in the following articles, for their third school year, i.e. 1893-1894, the School Board of Springettsbury Township further increased teacher salaries by two dollars per month.

The annual examinations of teachers for provisional certificates are held, usually in June, to fill teacher vacancies. The York Daily article of June 13, 1893, noted those exams, for Springettsbury Township, were held in Lefever’s school house. In which nine applicants presented themselves, of whom three failed to pass.

School Board members also observed teachers, teaching in classrooms several times a year. The Boards used these observations, plus annual exam results, to decide if they would retain a teacher the following year. These observations were also a factor in how the School Board assigned their teachers to the various schoolhouses, at the beginning of every school year.

When Springettsbury Township was established in 1891, it contained nine schoolhouses; to which all students walked to school. Seven of the schoolhouses were one-room, one-teacher; for all eight grades. Schoolhouses in Pleasureville and The Glades were two-rooms, two-teachers; each of which taught four grades.

School Boards established Territory Maps to show the region where each schoolhouse drew their students. The following is what such a map would look like for Springettsbury Township between the years 1891 and 1911.

The population in Springettsbury Township was nearly flat between the years 1891 and 1911; averaging 1750 Total, which included a school age population (Grades 1 through 8) averaging 405 students. In the 11-rooms available for instruction that averages 37 students per room.

There were 348 students attending Springettsbury Township schools, during the 1910-1911 school year. The classes were conducted in 11 rooms, with an average of 32 students per room. With overall enrollment down the School Board was not in a hurry to build a new schoolhouse. However Lefever’s was handing 43 students during the 1910-1911 school year, and that schools population was projected to soon hit 50, as the East York development, in Springettsbury Township, was taking off.

In the introductory photo, showing Lefever’s One-Room School students, during the 1911-1912 school year, I counted 36 students, plus the teacher. That photo was a donation to the Springettsbury Township Historic Preservation Committee by Luther Sowers. I discovered that photo in the Springettsbury Township Historic Preservation Committee Collections only after I wrote the January 2017 post Lefever’s One-Room Schoolhouse impacted York Suburban.

I contacted Luther Sowers shortly after that photo discovery and asked about the decrease in Lefever’s students from 43 to 36; when it was projected to soon hit 50. He indicated some East York residents had already begun to send their children to city schools, via the trolley. They were thus paying school taxes in Springettsbury, plus tuition to the City schools. And rather than paying both, they pushed for the creation of the Springettsbury Township Independent School District; in the territory of Lefever’s Schoolhouse.

The East York residents were willing to pay higher taxes than those in the overall Springettsbury Township School District; to have a school on par with those in the city. The result was Hiestand School in the East York development; which opened for the 1912-1913 school year. That two-room schoolhouse had electric lights, running water and indoor bathrooms.

Upheaval at the One-Room Schoolhouse