This is a postcard from the Spheel Grund Motel; at one time located at 3522 East Market Street in Springettsbury Township.  The upper part showcases the new lake behind the motel for boating and fishing.

I focused on the upper right part of this postcard in my post on Friday; noting the background of this photo contains farm buildings and the back of the Stony Brook Drive-In Theatre’s massive outdoor movie-screen. When completed in 2014 the new $3.8 million fire station in Springettsbury Township will sit directly on the site, once occupied by these farm buildings, as shown in this photo.

In this post, I’ll focus on the World War I Veteran that established the Spheel Grund Motel.  I’ll also attempt to date the photos in this postcard.

The information on the back of the postcard contains the full name of the business that Roy Grove established on May 12th 1953.  His Fictitious Name Application lists the name of the business as “Spheelgrund Motel, Spheel – Essen – Schloffen.”  The character of the business is “furnishing accommodations for tourists.”  The phone number (717) 755-9618 provides a clue in dating this postcard.  Numbers beginning with 755 in this area were instituted in 1964, therefore the postcard in my collection is dated 1964 or later.  Therefore this is a postcard from at least four years after the original owner passed away.

A postcard for sale on eBay had the EXACT SAME PHOTOS as my postcard, however the back contained several significant differences.  This postcard lists the owner, Roy H. Grove, and an earlier 47-7401 phone number.  I would suspect that the man in the photos, with his arms folded, is Roy Grove, therefore the pictures were taken prior to October 1960 and simply reused when the postcards were re-printed with updated reverse side information after 1964.  The location of 3522 East Market Street, it is just west of the present Stonybrook Family Restaurant, then a Howard Johnson restaurant.

This 1957 Ad in the Class of 1957 Panther, the Yearbook of Central High School, indicates that the motel has 35 units.  Therefore the photos in the postcard at the beginning of this post can be dated between 1958 and 1959 with a good degree of confidence.

After returning from WWI, Roy Grove and his wife Carrie went into the baking business.  Their bakery at 447 Atlantic Avenue in York was named Grove’s Bakery.  The bakery retained the Grove name even after Roy & Carrie sold that business.

Roy Grove’s next business venture in 1948 was the West End Delicatessen at 564 West Market Street in York.  The Deli was established with Martin R. Rohrbaugh as his business partner.  The West End Delicatessen was short-lived; the cancellation notice in 1949 stated “William W. Wogan, Attorney for Roy H. Grove, states that Martin R. Rohrbaugh, has left the County and his whereabouts are unknown.”  Roy Grove had a brief stint as a salesman at Bears Department Store in York a few years in the early 1950s prior to establishing the Spheel Grund Motel later in 1953. 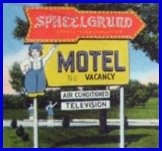 This Spheel Grund Motel Sign is from yet another motel postcard.  The copy is from the Collections of the Boston Public Library.  This postcard was published by Mellinger Studios in Lancaster PA and notes the motel offers 37 units; thus dating the postcard about 1957 or 1958.  How many of my readers remember seeing this sign next to the Howard Johnson Restaurant along East Market Street?  However based upon the view of this sign photo, an empty field still exists to the east, therefore it was taken between 1953 and 1956, since the Howard Johnson Restaurant construction commenced in late 1956.

Roy’s wife, Carrie Leib Grove, preceded Roy in death.  James J. Cooper managed the motel during Roy’s illness and for a short time after Roy Grove died in 1960.  From directories at the York County Heritage Trust the following is a list of the managers of the Spheel Grund Motel.

It appears that the Spheel Grund Motel went out of business about 1980.  I kind of remember that the motel was used as a summer campground for a few years thereafter, however I have not located any such details.  If any of my readers can provide any such details, please comment.