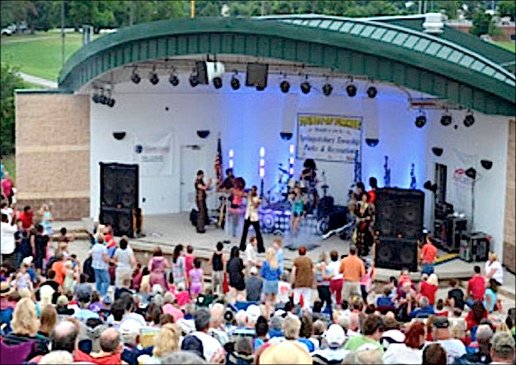 Adjoining properties were acquired, such that the Springettsbury Township Park now encompasses 51-acres; bounded by: Mount Zion Road, Whiteford Road, Pleasant Valley Road and Williams Road. The present park configuration opened in 2003, after extensive renovations and additional features such as the amphitheater; where free entertainment is provided via the popular Sounds of Summer concerts.

The Springettsbury Township Parks and Recreation Program was established in 1958. Through the 1960s, the township forged agreements with various Central York and York Suburban schools within the township; to utilize their facilities. At those playgrounds and baseball fields, the Parks and Recreation Department funded supervised summer playgrounds, while focusing on baseball programs for township youth.

Stage 1 of the Springettsbury Township Recreation Area was approved in 1969. The $70,000 project transformed inclined farm fields, within the 44-acre tract, into terraces; for placing playing fields, basketball courts and tennis courts. The Park opened in 1970, with a parking area for 115 cars. The following November 12, 1969, southward looking photo shows earth-moving equipment beginning to transform the farm fields, uphill from the Springettsbury Township School building.

The next aerial photo shows the Springettsbury Township Park layout as it entered its second decade. The park surroundings, during 1981, are also noted. Pleasant Valley Road did not exist in 1981, except for the short road segment north of the Girl Scout Building; however that segment was tentatively called Argyle Drive, i.e. likely assuming an extension of that existing road in the North Hills development. The 44-acre farm, which was conveyed by Dr. Williams to Springettsbury Township in 1966, is highlighted in yellow. Township offices / police station are in the east side of Mount Zion Road and the public works building is located directly across the road; where the east entrance to the Galleria Mall was placed.

Look for a future, requested, post about the Avalong Barn Mall, which opened in 1981. It operated several years in the former Avalong horse barns, which had focused mainly on Morgan horses. Avalong Dairy Bar & Drive-In, . . . Tourist Information Center, . . . and Springettsbury Township School have already been written about.

This photo also points out all the early frame and log built Strickler structures, for the 44-acre farm straddling Mount Zion Road, were located along the west side of the road. Springettsbury Township granted the YMCA the use of the frame Strickler farmhouse during the 1970s as an outreach center for youths. The first non-Strickler owner, of the 44-acre farm, built the still standing brick farmhouse on the east side of the road in 1899/1900.

Several years ago Mike Emig discovered the ownership history of a Strickler farm straddling Brillinger Road. The relevant Strickler family genealogy, per a 1938 visit with Clara Emig, was also included. Brillinger Road was a mystery to him; not appearing in any York County map books. In sharing the ownership history, Mike wrote he became a regular YorksPast reader after a Google search led him to my post explaining Mount Zion Road was known as Brillinger Road for much of the 1800s, since it was the often traveled road to Brillinger’s Mill.

Even so, Mike Emig did not realize exactly where the Strickler farm was located, along Mount Zion Road, until after reading the following paragraph in this YorksPast post from December, Christmas Baby a Springettsbury Township benefactor: “On April 12, 1944, Dr. Louis Williams and Zora Williams purchased a 43.9-acre farm, along Mount Zion Road, in Springettsbury Township. This farm had belonged to John C. Miller since 1899, and was sold by his heirs, following Mr. Miller’s death on June 25, 1943. The brick farmhouse on the east side of Mount Zion Road, shown in the photo, was constructed in the earliest years of John C. Miller’s ownership. The original frame farmhouse for the 43.9-acre farm, and all other supporting farm buildings, were located on the opposite side of Mount Zion Road.”

The earliest aerial photos for Springettsbury Township were taken in 1937. On that aerial photo, the 44-acre farm, highlighted in yellow, is the same tract which was subdivided from a larger property, and settled in 1793 by Jacob & Catherine Strickler.

Clara Emig, nee Strickler, who was born in 1860 and lived on this property in the late 1800s, disclosed the early farm history during a 1938 visit; in which she reported: “original Strickler log dwelling endures as dilapidated storage and Strickler frame dwelling houses farm-hands.” Those are the structures on the west side of Mount Zion Road.

The ownership history and Strickler genealogy of the 44-acre Strickler farm, as shared by Mike Emig, is transcribed directly as follows:

The Springettsbury Township Historic Preservation Committee researched the provenance of the 44-acre property long before I joined the Committee. This was done via deed and tax record research; as follows:

On April 2, 1828 (as noted within Deed Book 6U, page 92) John Strickler purchased the property from Joseph & Mary Strickler.

On April 3, 1876 (per Deed Book 6U, page 90) Henry Strickler purchased the property from John Flory, the Executor of the Estate of John Strickler.

On March 13, 1899 (per Deed Book 11N, page 536) John C. Miller purchased the property from Mary Strickler, administratrix, and John A. Emig, administrators, of the Estate of Henry L. Strickler.

The mites and bounds of the 44-acre property (actually 43-acres and 152 perches, which equals 43.95-acres) are the same on all deeds. The first mention of the brick dwelling house is 1899/1900 during John C. Miller’s ownership.

With the property history shared by Mike Emig, additional searches for the 1793, 1815 and 1828 deeds were made, without success. They were likely never recorded, like so many early property transactions. It is interesting that an administrator of the Estate of Henry L. Strickler is John A. Emig, the husband of Clara Emig, nee Strickler; who was the source of the Strickler property history in 1938. Clara might have been the keeper of the original property transaction documents, after her husband died.

However early deeds that are always recorded, are the Penn Agent Deeds within Springettsbury Manor. If the Manor land was never patented, John R. Coates had the authority to collect fees on behalf of the Penn heirs; such was the case during Jacob Strickler’s ownership.

The following 1876 Atlas shows part of Spring Garden Township, which becomes Springettsbury Township as of 1891. Note the 44-acre Strickler Farm is highlighted in RED. Brillinger Road is one of the few roads noted, by name, on the Atlas.

This atlas was surveyed a few years prior to the 1876 publication date; at that time the Heirs of John Strickler still had possession of the farm. A contested Will sometimes takes years to resolve. In the April 3, 1876 sale to Henry Strickler, the deed has neighbors listed as: to south and southwest is Peter Lint, to east is John Miller, to northeast is Jacob Dietz, and to north and northwest is Susan Fritz.

In 1972, Springettsbury Township Supervisors granted the YMCA the use of this cottage, for a YMCA Youth Project. The former Strickler frame farmhouse, on the west side of Mt. Zion Road, had no indoor plumbing or electricity; however volunteer electricians, plumbers, and YMCA Outreach workers quickly readied the building for use. For years it was known as Hienton House, the YMCA Outreach Center in Springettsbury Township.

Jacob Strickler [1768-1842] is buried within Strickler-Miller Cemetery. Jacob was likely born at the homestead of his grandfather Ulrich Strickler, because at the time of Jacob’s birth, on April 1st, 1768, his father John Strickler owned the homestead Strickler Farmhouse; standing next to cemetery. In 1793, Jacob established his own 44-acre farm nearby; it straddled present Mt. Zion Road, with the fields worked by his descendants for over 100-years . . . fields transformed into the nucleus of Springettsbury Township Park.