Early in 1950, the School Board of Springettsbury Township did the planning to close the One-Room Schoolhouses and replace them with a single modern schoolhouse.  Planning was done at the township level because this occurred two years prior to the Central Joint School System consolidation.  The April 20th, 1950 issue of The Gazette & Daily contained this article about plans to build a Springettsbury Township School:

The recent decision of the Springettsbury school board to build an eight-room school in the eastern end of the township and enlarge the Pleasureville school was hailed at the business meeting of the East Springettsbury township PTA last night at Springetts Fire hall.

“We’re happy about it,” an official commented afterwards on the compromise plan.

The recently formed group tabled a decision on national PTA membership until the annual meeting May 17, when officers will be elected.  The session will be held at 7:30 p.m. at Springetts Fire hall.  Curtis Hubley, Mrs. Charles Dellinger and Mrs. Mary Collyer were elected last night as the nominating committee.

Speaking on the topic “Why Consolidate?”, L. George Hubley, principal of the new Devers school in York, stressed that the one-room school cannot hope to hold the child’s interests as does the modern home, with such advances as television.

He said the big difference between old and new methods of education was that curriculum used to be the goal, while now it is a tool with the well-being of the child as the desirable result. 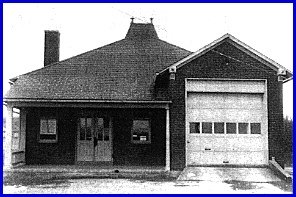 The newly formed East Springettsbury Township PTA met in the original Springetts Fire Hall shown in this photograph and described in a previous post.  The current, and soon to be former, Springetts Fire Company building at 3013 East Market Street was build in 1958, with additions in 1967 & 1974.

Continue reading for listings of final teachers at the One-Room Schoolhouses and initial teachers at Springettsbury Township School.

The 1952 Dedication Program, from the collections of York County Heritage Trust, includes a listing of the, 1952-1953 school year, teachers at Springettsbury Township School:

This is part 1 of the story about Springettsbury Township School and the five One-Room Schoolhouses it replaced.  Other posts in this series include: