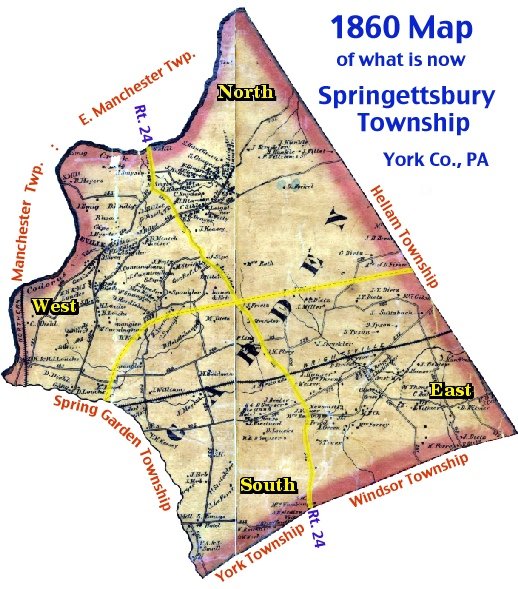 On Monday I wrote about The making of Shearer’s 1860 Map of York County, PA.  This illustration shows the section of what is now Springettsbury Township from Shearer’s 1860 Map.  The surrounding townships are labeled, as they exist today.

Springettsbury Township was established in 1891, however many buildings within the township are much older.  The building tally is 214 from the 1860 map, and that count does not include barns, stables, sheds and other out-buildings.

Today, some of these buildings appear as they did in 1860.  However many early buildings have additions or alterations.  These buildings are often disguised under siding or brickwork that was added well after they were originally built.

I’ve divided the township into four regions for a closer analysis of the building tally.  I used Route 24 as one divider.  A dashed line south of Ridgewood Road, curving to where North Hills Run enters Mill Creek, was used as the other divider. 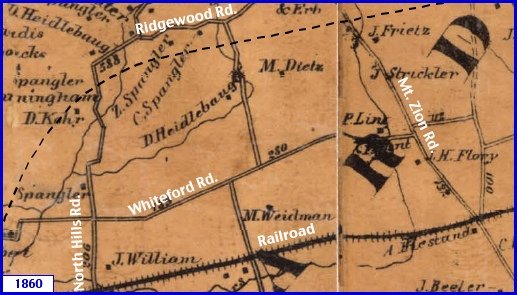 There, I’ve zoomed-in on the upper part of the South Region and added present road names, for better reader orientation. One can see many present roads existed in 1860.  Whiteford Road and the Railroad should be straight; they are not because they fall at the edge of two printed sheets, which did not align properly as the finished map was put together in 1860.  In future posts, I’ll examine 10 of the buildings within this area in greater detail.

The following tabulation provides a closer analysis of the 214 buildings, broken down by building type and region within Springettsbury Township. 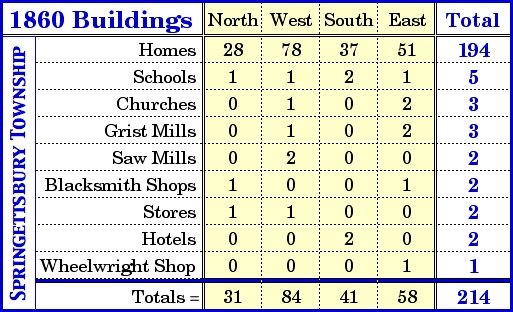