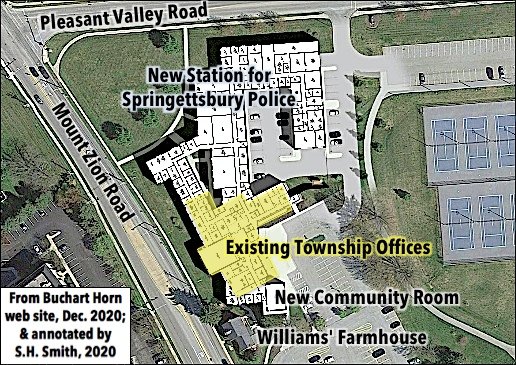 Generally most of those contacting me, had not heard anything about imminent Springettsbury Township building additions. The following is a summary of what I know:

I initially heard about a fire at the Police Station during the February meeting of the Springettsbury Township Historic Preservation Committee, where our committee was informed it was the consensus of the Township Supervisors to immediately began the site selection and development process for a new Police Station using Buchart Horn Architects. We were also informed, if building additions end up including a Community Room, it will sit on the site of the Township Farmhouse.

In listening to many of the Meetings of the Township Supervisors throughout 2020, most via Zoom: the site north of the Existing Township Offices was selected, from several options, for the New Police Station. In April the square footage of the initial plans were reduced. In May discussions about a Community Room option began and conclude in June with agreement to move forward with the room. In August, the plans are such that Buchart Horn is authorized to move forward with construction document phase. In November, the Springettsbury Township Planning Commission review Land Development of the new Springettsbury Township Police Station and provide several things to be addressed on the plans submitted by Buchart Horn.

The Buchart Horn site drawing, at the beginning of this post, was discovered via a Google search; it locates the new Police Station within Springettsbury Township municipal building renovations. I’ve shaded, in yellow, the location of the Existing Township Offices. This drawing shows the size of the New Community Room much reduced compared to the size that would have resulted in demolition of the Williams’ Farmhouse.

The following is a 2018 aerial photo of the existing Springettsbury Township municipal complex near the southeast corner of Mount Zion Road and Pleasant Valley Road.

The original Springettsbury Township Municipal Building along Mount Zion Road. was occupied January 1964. Prior to that the township rented rooms in volunteer fire company buildings, where the administrative office of Springettsbury Township occupied a single, small room within the single-bay firehouse at 2914 East Market Street until 1958. After which, the township could spread out into two larger rooms within the newly built 3013 East Market Street volunteer fire station. Until December 1963, those two rooms housed the township administrative office and township police department, which was established in 1958.

Location of Springettsbury Township Offices 1958 to 1963

Location of Springettsbury Township Office prior to 1958