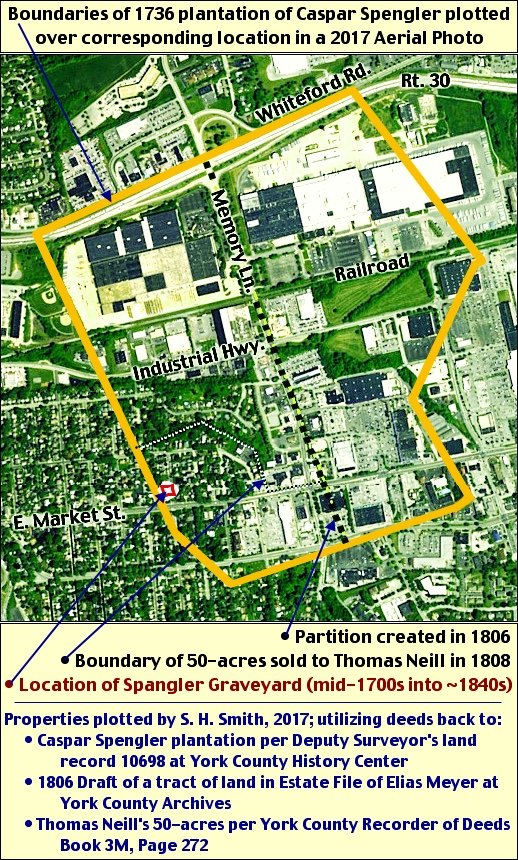 Caspar was the earliest Spangler to settle in York County, Pennsylvania; doing so in 1729 with his brothers Henry and Baltzer following in 1732.

Several YorksPast readers wanted to see the whole extent of Caspar’s initial plantation via the same methodology I utilized for a small section of the southwest corner of his land in the Post: Discover the Graveyard of earliest Spangler in York County .

In terms of current roads, Caspar’s land extends in a big swath on either side of Memory Lane, from approximately Eastern Boulevard northward just past Route 30 to Whiteford Road.

Philip Caspar Spengler died in 1786. After some involvement by the courts, the survivors appointed the oldest son, Charles Spangler to sell the whole plantation. The whole property was sold to Elias Meyer in 1792. The April 16, 1792 deed (Book 2H, Page 95) for the sale to Elias Meyer states the size of the plantation is 385-acres.

All the time the Spangler’s owned the property it is mostly referred to as “400-acres or thereabouts” or 385-acres, yet all the corner markers were as originally specified when the plantation was warranted to Caspar Spengler on October 30, 1736.

A little more than a year after Edwin Meyers owns the plantation, the 1736 warranted corner markers are surveyed for the first time on May 15, 1793 with the surveyed size recorded as 359-acres and 152-perches (Note: 160-perches = 1-acre). This survey is filled as Deputy Surveyor’s land record 10698 at the York County History Center.

Elias Meyer died in 1805 and within his Estate File at the York County Archives is the following 1806 Draft for his land in York Township; that land area is renamed Spring Garden Township effective 1821, then Springettsbury Township since 1891. 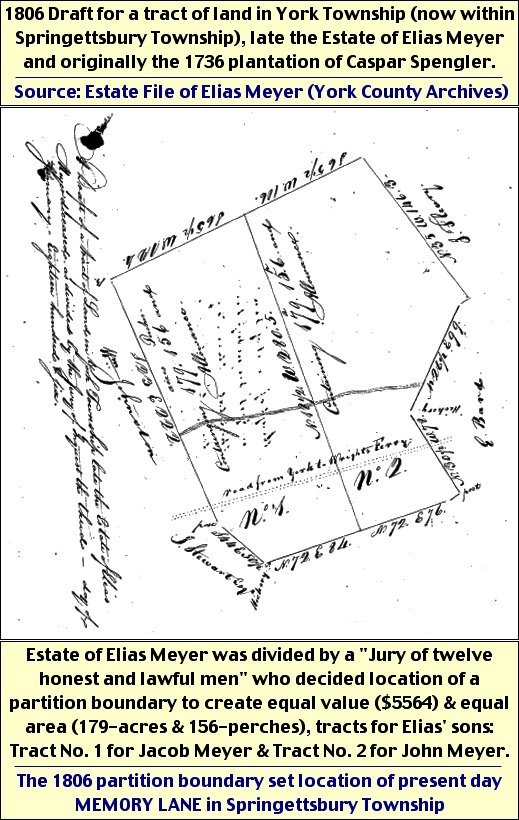 The Estate of Elias Meyer was divided by a “Jury of twelve honest and lawful men” who decided the location of a partition boundary to create equal value ($5,564) and equal area (179-acres and 156-perches) tracts for Elias’ sons: Tract No. 1 for Jacob Meyer and Tract No. 2 for John Meyer.

It is this Jury of 12-men, in setting the partition boundary, that effectively establish the location of present day Memory Lane in Springettsbury Township.

I’m still researching the next post in this series, which will focus on the Spengler/Spangler, Meyer/Meyers, and Neill family members, plus close neighbors, that were potentially buried in the “Spangler Graveyard.”