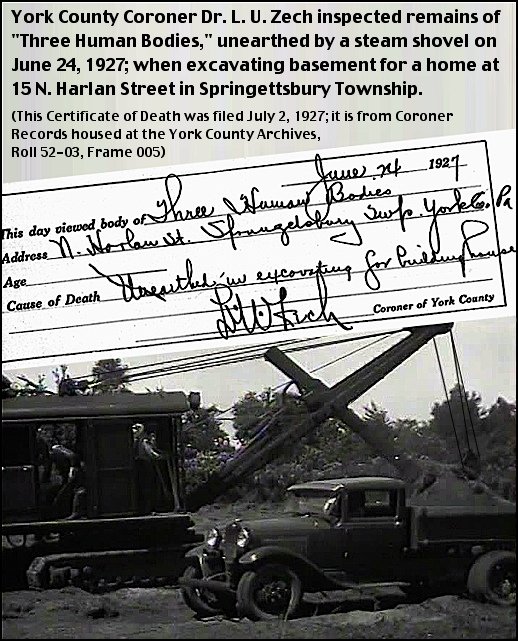 Several YorksPast readers asked me to research the ensuing burials of the bodies unearthed from the colonial Spangler Graveyard; a forgotten private burial ground that was eventually built over in the first block of North Harlan Street within Springettsbury Township. The research for that graveyard appeared in the Post: Discover the Graveyard of earliest Spangler in York County .

The Certificate of Death for the three human bodies unearthed on June 24, 1927 was filed July 2, 1927. York County Coroner Dr. L. U. Zech examined the bodies the same day they were unearthed. The principal record of this examination is housed within the Coroner Records at the York County Archives. The copy, within the illustration, is from Microfilm Roll 52-03, Frame 005. Click on this LINK for a Full View of the illustration in this post if details are cut off in the cropping of the illustration.

On June 24, 1927, workmen, employed by general contractor J. R. Hall, were excavating the basement for a house being constructed for Carl Obermaier, at 15 North Harlan Street. The workmen were utilizing a steam shovel owned by the Paul R. Hostetter company, when the workmen noticed some unusually long bones; however as skulls were unearthed the workmen were convinced these were human bodies.

The workmen immediately notified their employer. Mr. Hall contacted the York County Coroner, who made positive identification that these were over 100-year old remains of three human bodies.

An article in the June 24, 1927 issue of The York Dispatch, reported Coroner Zech instructed the contractor to place all the human bones in a box. The Coroner made arrangements with a funeral director and issued the necessary papers for the burial of the bones in a local cemetery. Unfortunately, as of yet, no specific records have been uncovered to indicate which funeral director. When the appropriate 1927 funeral director is discovered, their records should pinpoint the local cemetery where the Spangler bones were buried.

I’m still researching the final post in this series, which will focus on the Spengler/Spangler, Meyer/Meyers, and Neill family members, plus close neighbors, that were potentially buried in the “Spangler Graveyard.”