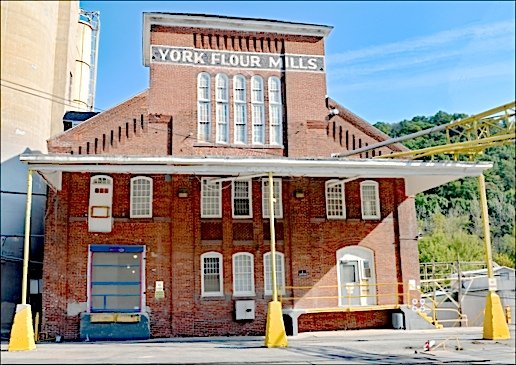 Mike Spyker noticed sorghum growing along Blackbridge Road near what began as Small’s Codorus Mill and presently a mill operated by Ardent Mills. Sorghum is an unusual crop for the Eastern United States.

Ardent Mills is based in Denver, Colorado. They own a network of over 35 community mills, mixing facilities and a bakery, located throughout the United States, Canada and Puerto Rico. Up to several months ago, Ardent Mills owned two mills in York County.

On May 10, 2019, Ardent Mills announced the closure of four of its mills; among them, was their other York County mill at 321 Taylor Avenue in Red Lion, which closed effective June 30, 2019. That mill began as the Red Lion Milling Company in 1920; thus barely missing out on celebrating one-hundred years of milling operation.

The following photo shows a telephoto view looking eastward from Blackbridge Road, across a sorghum field, with the York Mill of Ardent Mills in the background. Mike Spyker took this photo on August 20, 2019.

Sorghum is a cereal grain that grows like corn, however instead of tassels on top like corn, it has clusters of many seed grains. The seed grains are small and round. There are many sorghum varieties, growing anywhere from 2 to 12-feet tall. The fields along Blackbridge Road are of the 3-feet tall variety.

According to the National Sorghum Producers, the Sorghum Belt runs from South Dakota to South Texas and the crop is grown primarily on dryland acres. Over the years, sorghum has been used in animal feed domestically or utilized in industrial and food uses. In recent years, sorghum’s use in the ethanol market has seen tremendous growth, with approximately 40 percent of domestic sorghum going to ethanol production.

Sorghum is also gaining popularity in the United States primarily as a result of its gluten-free property and because it is celiac safe. As a result, sorghum now can be found in more than 350 food product lines in America. In most products for human consumption, the gluten-free grain is usually ground into a meal; which is used as a wheat flour substitute ingredient in the end product.

As sorghum nears harvest, the seed grain clusters darken, such as shown in the above close-up photo. I drove by the Blackbridge Road sorghum fields yesterday; they have not yet been harvested. If you want to see what a sorghum field looks like, I suggest you take that drive soon. The following Bing.com aerial view has been annotated to show the location of the fields, nearly across the road from the York County Solid Waste Incinerator.

At the last minute I checked who owned the land where those sorghum fields are located. The York County Solid Waste and Refuse Authority is the owner of that land. The initial suspicion was those sorghum fields had some connection to Ardent Mills; who only own the property between the railroad and the Codorus Creek.

Maybe those sorghum fields are connected to a program with the county agricultural extension office? If anyone knows the story behind the sorghum fields, please comment.