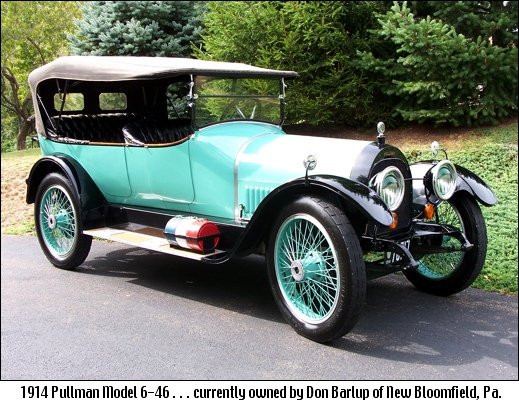 My post Vulcan Technology is in Pullman’s Electrically Controlled Gasoline Automobile featured an ad for the 1914 Pullman Model 6-46A appearing in the Fifth Annual Harrisburg Auto Show; that opened the evening of March 14, 1914.

The Vulcan Electric Gear Shift had it origins in 1909 U. S. Patents by Frank Beemer. The Vulcan Motor Devices Company of Philadelphia purchased the rights to these patents. Vulcan worked on commercializing the Electric Gear Shift design. Initially they had some problems, however by 1913 Vulcan had a marketable product.

Pullman Motor Car Company in York, PA, was one of the initial car manufacturers to offer the Vulcan Electric Gear Shift on one of their models. The appeal of these devices created a stampede from other carmakers for the product. The Vulcan Motor Devices Company had trouble meeting demand and ultimately decided to outsource the manufacturing to The Cutler-Hammer Manufacturing Company of Milwaukee; they held the exclusive license under the Vulcan Patents.

There are Pullman Automobiles that exist with the Cutler-Hammer electro-magnetic transmission that was used in some 1916 Pullmans. The Deluxe Coupe on display at the Agricultural and Industrial Museum of the York County Heritage Trust is one of those autos. However Don Barlup owns the sole surviving Pullman Automobile with a Vulcan Electric Gear Shift. Upon leaving the factory in 1914, that steering wheel and instrument board appeared like this illustration submitted by Paul Vaughn: 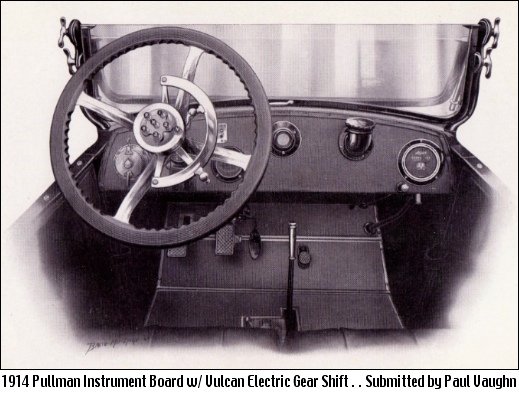 Many owners before Don Barlup, the push-button controls, found in the center of the steering wheel, were removed and a plain aluminum disc was used to cover over the control box. Don was very lucky to locate a complete steering assembly with the controls intact just last year. The transmission and Vulcan shift mechanism is complete and was never removed from the car. At some point, the newly found steering wheel push button panel and controls will be installed to get the original push-button shifting up and running. 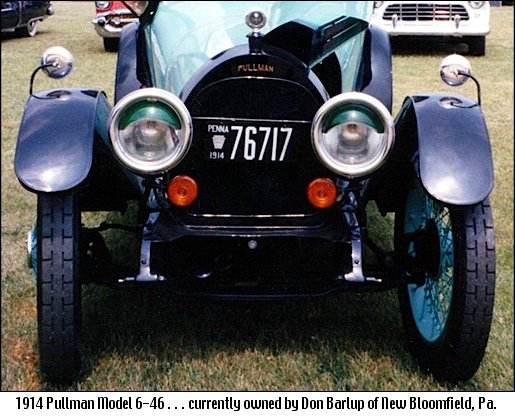 Other Pullman Automobile related posts include: