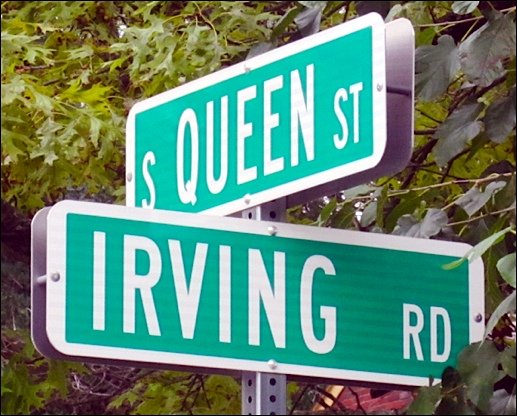 Racing to the Cherry Top on Queen Street

The finish line of the 975-foot Queen Street course was at Irving Road. After applying a dragging brake, the soap box derby racers usually came to a stop in front of the Cherry Top ice cream place at Springdale Avenue.

As the 1953 York Soap Box derby champion, the photo shows 12-year-old William LeCates, of 655 Colonial Avenue, posing for photos at the judges’ stand in his racer sponsored by Gregory’s Menswear.

All contestants were required to enlist a sponsor. The sponsor paid the cost of the official wheels, steering apparatus, and lettering on the car; all per All-American Soap Box Derby Rules. The entrants were permitted to spend $5 for materials to build their cars. Sponsor fees also paid for insurance to cover each contestant and the race.

The 1953 race on the Queen Street hill contained 56 racers. William LeCates joined his brother as a York Soap Box derby champion. His older brother Byron LeCates was the champion in 1948; when the race was held on the Madison Avenue hill.

The following photo shows three lanes of Queen Street soap box derby racers approaching the finish line at Irving Road in 1953. The sides of the street were lined with snow fencing to prevent youngsters from dashing unto the course during the races.

For a comparison, the following NOW photo is nearly the same view while standing near the Irving Road finish line of the South Queen Street course; utilized from 1952 until 1959 inclusive.

The local champion was an automatic entrant in the national finals at Derby Downs in Akron, Ohio. The Chevrolet dealership of Ammon R. Smith paid full expenses to send the local Soap Box Derby champion, each year, to compete in the nationals.

After crossing the finish line, at Irving Road, on the 975-foot long South Queen Street course. The racers applying a dragging brake to bring the cars to a stop.

I’ve been told, groups of drivers often had a covert contest to see who could brake the closest to stopping at a mark in front of the Cherry Top ice cream place at Springdale Avenue. The structure that once housed the Cherry Top still stands today; as shown in the following photo.

The Cherry Top was on the southeast corner of South Queen Street and Springdale Avenue in York City. A search in old newspapers reveals the Cherry Top was located at 1001 S. Queen St. from the mid-1930s until the early 1960s.

The subject of the next post in this series explores the third course utilized for Soap Box Derby racing in York.

2 comments on “Racing to the Cherry Top on Queen Street”