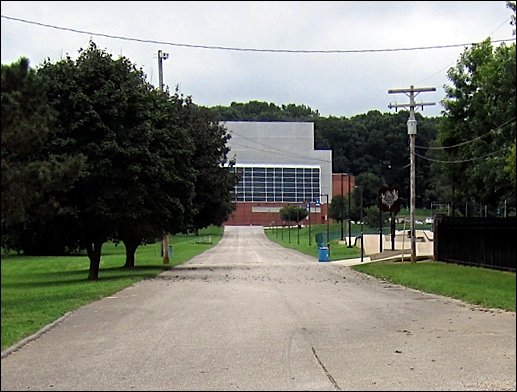 Soap Box Derby racing began on York streets in 1939 and progressed to a dedicated track in York’s Memorial Park from the 1960s into the 1990s. In 1972, Debbie Laughman was the first girl to win the York Soap Box Derby championship.

This is the fourth in a series about Soap Box Derby racing in York. Previous posts include: an introduction, races on Madison Avenue and races on South Queen Street.

As early as 1955, a hill in York’s Memorial Park was proposed as a permanent site for a Soap Box Derby track in York. A permanent location would provide a site for entrants to practice, offer more flexibility in scheduling races and be safer for the racers and spectators.

The following photo appeared in the July 25, 1958, issue of The Gazette and Daily; it shows York derby chairwoman Vera Smith, making another pitch for such a track, which had been bogged down in city council for three years. Vera looks at the proposed site, next to the east side of the left field wall of Memorial Stadium, and extending uphill to the tree line.

The first time girls were allowed to compete in the York Soap Box Derby was 1972. That year five girls were among the 56 entrants. In the following photo, from The York Daily Record of July 12, 1972, are three of the girls entered; from left they are: Trinea Klunk, 11, Red Lion, Robyn Driscoll, 12, Yorklyn, and Debbie Laughman, 13, Spring Grove RD 1.

Debbie Laughman emerged as the Champion of the 1972 York Soap Box Derby races, held July 15, 1972, on the Memorial Park track. As the winner, she received a $500 savings bond, two trophies and an all expenses paid trip to compete in the International Soap Box Derby competition in Akron, Ohio, the following month.

At Akron there were 27 girls competing among the 260 entrants. All racers were champions of their home tracks. Debbie Laughman won her first three heats, advancing in the brackets, before loosing in her fourth heat.

During the races at Akron, Ohio, a Texas newspaper, The Waxahachie Daily Light, captured Debbie Laughman working on her Soap Box Derby car and provided the caption: “Prepare for Derby. Debbie Laughman, 13, of York, Pa., looks more like a mechanic than a girl as she puts on the finishing touch with a pair of plyers, wrench and a screwdriver.”

The Soap Box Derby track in Memorial Park was utilized into the early 1990s. A Deed, by the City of York on October 22, 1990, granted about 30 acres of land to the Penn State York Campus. Most of the land was wooded, however the grant also included some hillside land, including the derby track. The land was granted with the stipulation Penn State build a performing arts center, which could be rented for community functions.

Construction was started on the performing arts center, now known as The Pullo Center, during December 2004, and the Grand Opening was held August 25, 2005. The remains of Memorial Park’s Soap Box Derby track are seen in the following photo, with The Pullo Center at Penn State York in the distance.