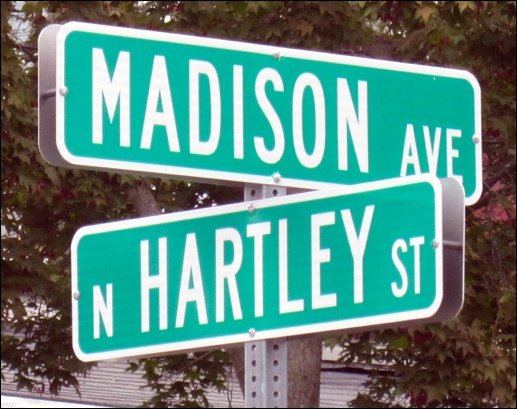 The contestants were required to enlist a sponsor. The sponsor paid the cost of the official wheels, steering apparatus, and lettering on the car; all per All-American Soap Box Derby Rules. The entrants were permitted to spend $5 for materials to build their cars. Sponsor fees also paid for insurance to cover each contestant and the race. In the above photo, I’ve zoomed in on a Soap Box car, sponsored by Bury Bros. Famous Hamburgers, as it wins a heat on the Madison Avenue course in 1951.

The following photo is a wider view, with the Bury Bros. car at the left, crossing the finish line at Hartley Street: before the other two cars, at the right. At the upper right, the steep part of Madison Avenue flattens out after it crosses Roosevelt Avenue.

For a comparison, the following NOW photo is nearly the same view while standing near the Hartley Street finish line of the Madison Avenue course; utilized from 1939 until 1951 inclusive. The steep part of Madison Avenue flattens out after it crosses Roosevelt Avenue.

The Soap Box Derby was run on the Madison Avenue course until the onset of World War II; whereupon there was a four-year break. The races resumed in 1946. The local champion was an automatic entrant in the national finals at Derby Downs in Akron, Ohio.

The subject of the next post in this series is the Queen Street hill course utilized for Soap Box Derby racing from 1952 through 1959. From 1939 through 1959, the Chevrolet dealership of Ammon R. Smith paid full expenses to send the local Soap Box Derby champion, each year, to compete in the nationals.