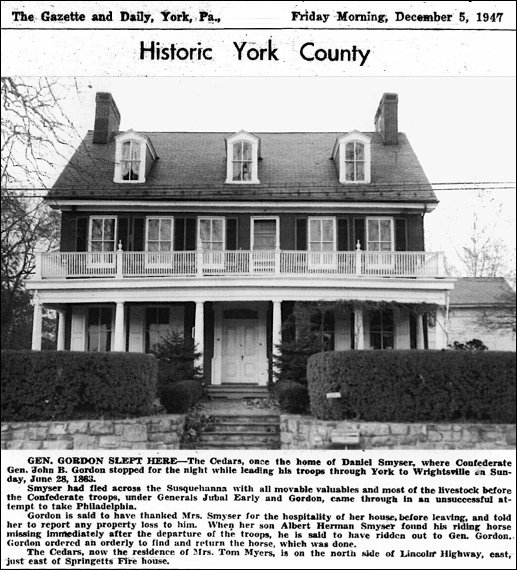 Bob Smyser had a passing interest in family history when he was given a box of papers, recently discovered by his dad; it contained family history research, started by his dad’s grandmother. I met Bob at my family history talk near Pittsburgh last month. He shared a Civil War era story from those papers about his ancestor, Albert Smyser:

“When the rebels invaded York County, a prized horse, belonging to Albert Smyser was stolen by the confederate troops. Sarah Smyser, the mother of Albert , was promised no property would be taken in exchange for providing the use of her home to the rebel General for a midday nap and meal before his troops marched towards the Susquehanna. Upon the General being made aware the horse was taken, he ordered it returned. Albert got back the horse; whose offspring, became part of Smyser lore.”

Bob wanted to know if I could uncover the Smyser lore associated with the offspring of that horse. I was not successful; both via online and via Smyser family histories at the York County History Center. However I did quickly discover where the home of Sarah Smyser was located via the series of “Historic York County” photos published in The Gazette and Daily during the late 1940s. Click on this LINK for a Full View of the illustration in this post if details are cut off in the cropping of illustration. The caption for the December 5, 1947, photo is:

“GEN. GORDON SLEPT HERE—The Cedars, once the home of Daniel Smyser, where Confederate Gen. John B. Gordon stopped for the night while leading his troops through York to Wrightsville on Sunday, June 28, 1863. Smyser had fled across the Susquehanna with all movable valuables and most of the livestock before the Confederate troops, under Generals Jubal Early and Gordon, came through in an unsuccessful attempt to take Philadelphia. Gordon is said to have thanked Mrs. Smyser for the hospitality of her house, before leaving, and told her to report any property loss to him. When her son Albert Herman Smyser found his riding horse missing immediately after the departure of the troops, he is said to have ridden out to Gen. Gordon. Gordon ordered an orderly to find and return the horse, which was done. The Cedars, now the residence of Mrs. Tom Myers, is on the north side of Lincoln Highway, east. Just east of Springetts Fire house.”

This house still stands at 3103 East Market Street. I remember the pictured stonewall; that was in front of the house, before East Market Street was widened to 4-lanes. The high red brick retaining wall now fronts the home, which is now boarded up and in imminent danger of collapse.

The copywriter for the photo caption did introduce several inaccuracies. General Gordon did not stop for the night; since his troops entered York in the morning of June 28th while continuing east, camping out east of York until 2:00PM; when they broke camp and marched to Wrightsville. Sarah’s husband Daniel Smyser, died while ploughing a field on March 26, 1862. Daniel’s family continued to live in the house as the ownership passed to John Smyser; the brother of Daniel. In 1869, Albert Smyser acquires the house.