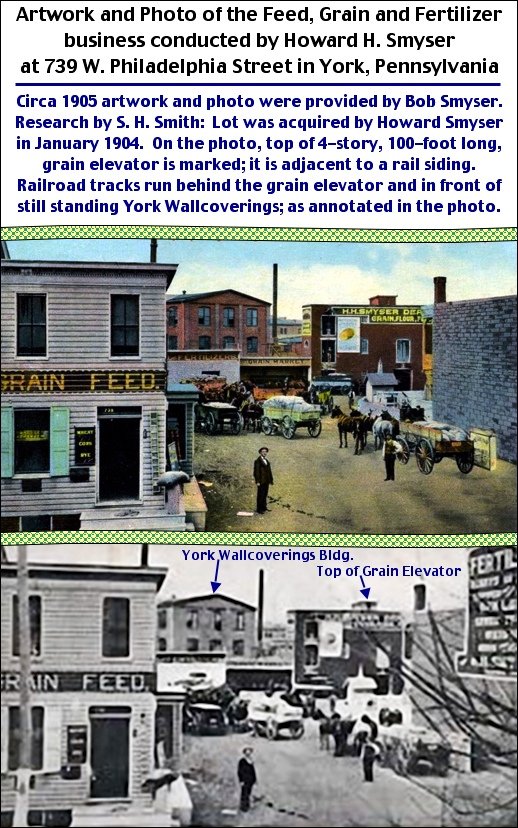 Bob Smyser shared artwork and photo of the feed, grain and fertilizer business conducted by Howard H. Smyser at 739 West Philadelphia Street in York. Click on this LINK for a Full View of the illustration in this post if details are cut off in the cropping of illustration.

Bob disclosed the back of the photo contained the writing, “The final location of Howard Smyser’s business in York.” Bob asked me to date the photo and verify the 739 West Philadelphia Street location, as noted on the front of photo.

During my research, I discovered a large, very much faded, ghost sign is visible on the west wall of the building at 731 West Philadelphia Street; overlooking the 739 lot. That sign is the large Fertilizer Sign, from Howard Smyser’s business; shown at the right side of the circa 1905 photo. I’ve positioned the photo below the artwork for comparison purposes.

My research turned up an article in the March 25, 1904 issue of The York Daily; which reported H. H. Smyser, who recently acquired possession of a tract of land will erect large grain elevator. A Deed search indicated Howard H. Smyser made the purchase on January 13, 1904, for the lot, which is 739 W. Philadelphia Street. That tract adjoined neighboring lots, to the east, already in the possession of Howard H. Smyser. The article notes the grain elevator would be built as a frame structure 50 x 100 feet and four stories in height.

Howard Smyser was an automobile enthusiast; Bob Smyser shared he was an early dealer of electric vehicles and Reo trucks; the subject of another Post. Since there are only horse drawn wagons in the photo; I suspect the photo was taken very soon after the grain elevator was in operation, i.e. late 1904 or early 1905; since there are no leaves on the tree branches at the right side of the photo. The artwork, for advertising purposes, closely follows the photograph; except for removal of poles, tree branches and the large fertilizer sign on the side of the building at 731 West Philadelphia Street.

Howard H. Smyser was born in 1867. In the photo and artwork, Howard is thus about 38-years-old. He previously conducted business at 729 and 659 West Philadelphia Street, where fertilizer and lumber sales were the dominant products.

Howard Smyser sold his 739 West Philadelphia Street business to the Owings Brothers about 1920. The Owings operated as June Bug Flour and Feed Mill for another 40-years.

This pictured property is now a storage lot. When standing on Philadelphia Street and looking north into the tract, one can still see the back end of a York Wallcoverings building, on the other side of the railroad tracks; just as it appears in the photo and artwork.

A large, very much faded, ghost sign is visible on the west wall of the building at 731 West Philadelphia Street. That sign is the Fertilizer Sign, from Howard Smyser’s business; shown at the right side of the circa 1905 photo. Even though that sign was erased in the artwork, shortly after the photo was taken; in reality, the Fertilizer Sign, painted on the wall, still remains visible over a Century later.