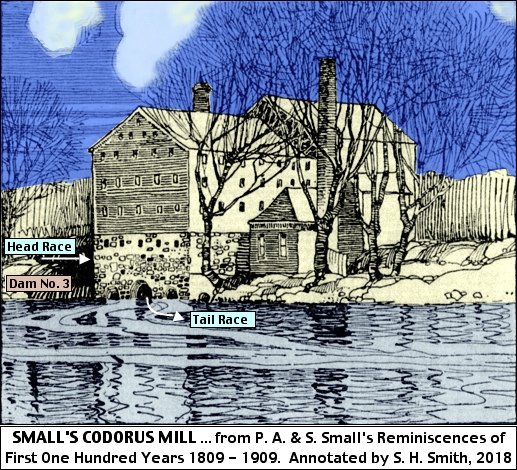 Part six explores Small’s Codorus Mill; built concurrently with Dam No. 3 and Lock No. 3 of the Codorus Navigation Company. This illustration is labeled “Small’s Codorus Mill” within the P. A. & S. Small publication on their “Reminiscences of One Hundred Years 1809-1909” in business. It comes from the section titled, “The Manufacture of Flour;” quoting the first paragraph of that section:

“In 1830 George Small commenced the erection of a flour mill in Spring Garden Township and called it the Spring Garden Mill. The first flour was used either locally or hauled by wagon to Philadelphia and Baltimore, where it was sold on commission. In 1830 and 1831 the local supply of wheat proved insufficient, and [beginning in 1833] large quantities were brought down the Susquehanna and up the new canal constructed by the Codorus Navigation Company to York. About 1835 P. A. & S. Small erected Codorus Mills.”

I’ve added a light color tint, to the water and sky, on the original B&W illustration to better highlight Small’s Codorus Mill. I’ve annotated the location of the mill’s head and tail races, plus the westward end of Dam No. 3, of the Codorus Navigation Company. The dam was built at this point on the Codorus Creek during the construction of the canal between 1830 and 1833.

Dam No. 3 across the Codorus Creek came right off the southern corner of Small’s mill at that location; which allowed for a very short head race to the water wheels, and eventually water turbines, within the mill. The slackwater elevation from the downstream Dam No. 4 set the tail race height; right up against the end wall of the mill, as shown in the illustration. Further details are provided later in this post.

Click on this LINK for a yorkblog.com Full View of the four original illustrations in this post if details are cut off in the cropping of illustrations, or if they have been removed from the ydr.com site.

The research on the location of Dam No. 3 had several inconsistencies. On Grant Voaden’s 6/23/73 summary sheet for Small’s Codorus Mill, within GV-49 File at York County History Center, he wrote the dam was about 200 yards upstream, i.e. south, from the mill. That seems to be the earliest source for later uses of the “200 yards location.” However that dam placement is not consistent with information on Sanborn Maps and historic aerial photos; showing the dam coming right off the southern corner of Small’s Codorus Mill.

The following illustration is a split image. The left side utilizes the 1908 Sanborn Fire Insurance Map drawing of Small’s Codorus Mill. The right side is a visualization of the location of Dam No. 3 and Lock No. 3 via my assessment of the whole of my research. 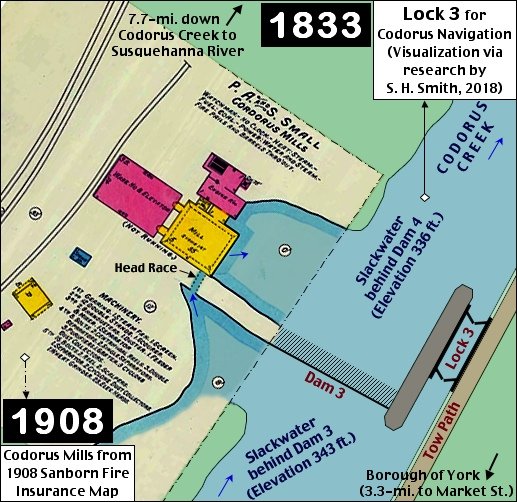 Lock 3, in the 1833 illustration, is required to lower, or raise, a canal boat 7-feet height; i.e. 343-feet minus 336-feet; the elevations of the slackwater pools on either side of the lock. Lock 3 is located 3.3-miles, via the Codorus Creek, from the West Market Street landing of the Codorus Navigation Company, and located 7.7-miles from the Susquehanna River.

The yellow buildings, on Sanborn maps, indicate they are of primarily frame construction, although the mill building does contain the note the first level is stone. The warehouse, attached to the west side of Small’s Codorus Mill, is shown in red; indicating brick construction.

Prior to the construction of Codorus Navigation’s Dam No. 3 and Lock No. 3, there was a smaller dam in this general area; was that the dam 200 yards upstream? Michael Weidner operated a small-scale water-powered wire manufacturing business in that vicinity. That Michael Weidner business was sold at Sheriff’s sale in 1830 to John Brillinger. Is that the same Michael Weidner who operated the forge across from Loucks Mill? I raise that question, because I’ve discovered Michael Weidner, the elder, also had a son Michael Weidner, who is listed as a blacksmith. The perplexing Weidner family history research is far from complete and is a story for another time: getting back to the subject at hand; the Codorus Canal.

The following September 18, 1937 historic aerial photo shows the exact same area as my 1833/1908 illustration. Grant Voaden determined that the last run of Small’s Codorus Mill by water power was in 1945. The dam, still providing the 7-foot head for water power, was blown up by the Army Corps of Engineers on September 5, 1945. It was one of the first things the Corps did upon getting back to the Codorus Flood Control work following the September 2, 1945 surrender of the Japanese and the end of World War II. 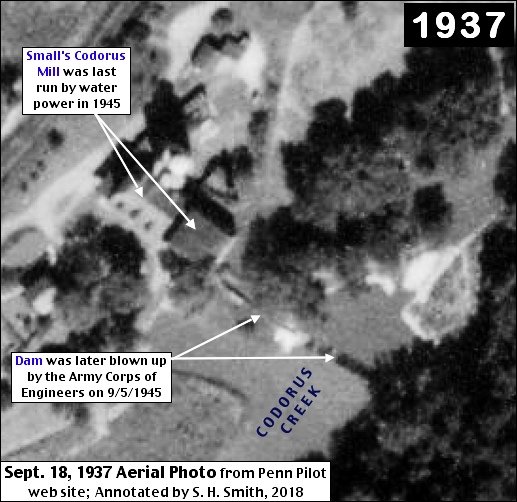 Looking upstream, and downstream, from Small’s Codorus Mill, on 1937/1938 historic aerial photos, the indicated dam, in 1937, was the only one apparent; and it matched the placement on the Sanborn map and was consistent with features in several old Small’s Codorus Mill photos at the York County History Center.

The following 2015 Google birds eye WESTWARD LOOKING aerial photo shows the same area as the previous illustrations. I’ve annotated where the Northern Extension of the York Heritage Rail Trail is located on east side of the Codorus Creek in Springettsbury Township. Ardent Mills continues to operate the former Small’s flour mill, located on west side of the Codorus Creek in Manchester Township. 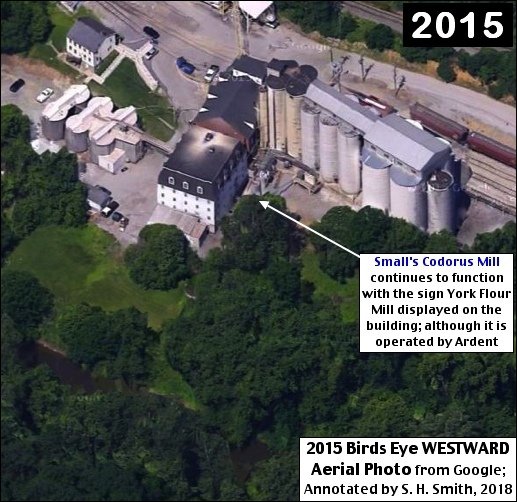