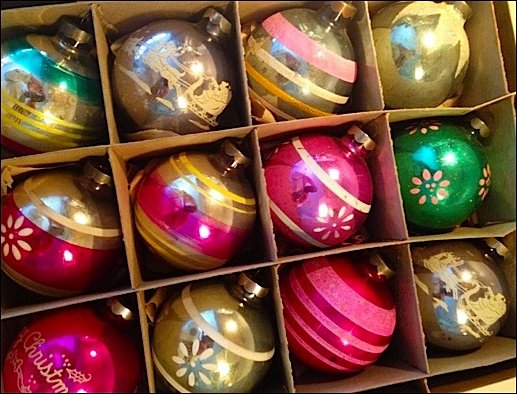 Glass Shiny-Brite ornaments, purchased at Woolworth’s in York, have decorated our Christmas trees since the 1950s. In the 1960s production of Shiny-Brites moved to a plant in Emigsville.

The Shiny-Brite brand was the brainchild of Max Eckardt; who began as a major importer of European Christmas ornaments. However, with the shadow of war on the horizon, Max explored producing ornaments in the United States. He was able to convince Corning Glass Company to modify one of their light bulb making machines to produce glass ornaments, once he had a firm order from Woolworth Five-and Dime stores for a minimum of 200,000 ornaments.

Max christened his creation, Shiny-Brite, since he painted the complete inside of the glass, making the exterior of the ornament shine. When the exteriors were painted, they were generally not completely covered; i.e. only stripes, stencils, or patterns were applied.

The Shiny-Brite box featured Uncle Sam shaking hands with Santa, along with the words “American Made.” In December 1939, the first mass-produced Shiny-Brites were sold nationwide in Woolworth’s stores.

The early production of Shiny-Brites was at Eckardt’s New Jersey plants in North Bergen and West New York; while Max Eckardt & Sons’ main office was at 45 East 17th Street in New York City.

In May 1964, the announcement was made to build a Shiny-Brite plant in Emigsville, Manchester Township in York County, Pennsylvania. The new 269,000 square foot plant would consolidate all Shiny Brite production into one facility and would require a workforce of 300 persons. Design of the plant was done locally; by Noonan Engineering. R. S. Noonan, Inc. was the general contractor.

The plant opening was in April 1965; at 105 Aberdeen Road. The following 2018 Google Aerial Photo points out the location of the plant, in the southeast part of Emigsville.

The Shiny-Brite plant often ran three shifts the majority of the year. And as expected, extra help was brought in just before Christmas. The following is a typical help wanted ad during November of 1966.

However Poloron had an underutilized facility in Batesville, Mississippi. That fact, coupled with less expensive labor costs in Mississippi, resulted in all the Emigsville operations moving to Batesville in 1975. Nevertheless, it was not long before even cheaper labor from overseas caused the closure of the Shiny-Brite Division entirely in the early 1980s.

Vintage Glass Shiny-Brite Christmas ornaments are still available at antique stores and on the Internet. Additionally Radko, who made ornaments in Poland, bought the Shiny-Brite name in the late 1990s and started selling replicas in 2001.