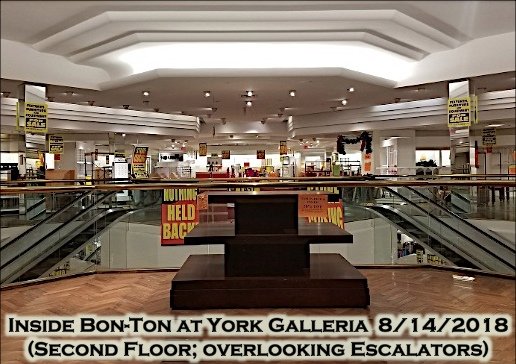 Ellen Lentz shared some Bon-Ton memories and insight about the store in the York Galleria being repurposed as a Self-Storage Facility. Ellen worked at the Galleria’s Bon-Ton during summers and Christmas breaks in her college years. She was always envious of long time employees who were fortunate to have worked at the downtown Bon-Ton during the 1950s and 1960s; since they always talked so fondly of those times, especially during the holidays.

During a visit back to Pennsylvania earlier this month, Ellen noticed work being done on the Bon-Ton at the Galleria. Her husband remembered seeing articles earlier this year. Those articles raised some questions, and like many long time YorksPast readers, Ellen shared the articles, with her questions.

In the post at this link, I shared my earliest memories: of going Christmas shopping with my parents in downtown York, of my first photo with Santa Claus in the Bon-Ton Toyland during 1952, and of my initial time seeing Santa climb the big aerial ladder into the third floor of the Bon-Ton during 1954.

I always did some of my Christmas shopping at the Bon-Ton Department Store after it moved from downtown York to Springettsbury Township; first to The York Mall in 1975, and then to The Galleria in 1989. My final Christmas shopping at the Bon-Ton occurred in 2017. On February 4, 2018, Bon-Ton Stores, Inc. filed for Chapter 11 bankruptcy protection. Many of the Bon-Ton stores across the country, including the one at the York Galleria, were allowed to stay open; until they sold most of their inventory.

The introductory photo in this post was taken August 14, 2018; it shows the second floor of the Bon-Ton, at the York Galleria, in a view overlooking the in-store escalators. This photo was taken within days of the final closing. That photo rekindles a 1950s memory of riding the first escalator in York; at the Bon-Ton in downtown York.

Last month I took the following “ghost lettering” photo of The Bon-Ton sign remains on the north side exterior of former Bon-Ton at York Galleria. Another person walking nearby, made the comment, “it looks like the Bon Ton is crying.” I had initially planned on a Christmas post using that photo, i.e. similar to the “ghost lettering” posts: at the York County Shopping Center and a Ford sign in York City.

Then on Friday, Ellen Lentz shared two articles. The first is an April 29, 2021 citybiz article about WMG Partners, a subsidiary of Miami-based MCSS Self-Storage, acquiring the Bon-Ton site at the Galleria. The article contained a depiction of the former Bon-Ton building, at the York Galleria, repurposed as a self-storage facility, to be managed by Life Storage. I compared that depiction to a 2019 realtor photo of the former Bon-Ton in the following THEN and SOON-TO-BE illustration.

That citybiz article noted financial details were not disclosed. Ellen was curious if I had seen anything about the transaction in local newspapers. I had not, although the York County Tax Assessment site contained the details for the sale of the 7.49-acre site; with included the 2-story former Bon-Ton building and much of the parking on the north side of the Galleria. The previous owner is listed as: BT York PA Business Trust. The new owner is: WMG York LLC. The sale date is: April 28, 2021. And the sale price is: $4,800,000.

Over the weekend, I took a few photos of the construction now underway to repurpose the former Bon-Ton building, at the York Galleria, as a self-storage facility, to be managed by Life Storage. It appears the former main, ground-floor, entrance on the north side will be used to access the storage facility when only adding or retrieving a few small items.

The next two photos show views of the former west-side, ground-floor, entrance. It has been configured with an additional building entrance, and with loading and unloading parking directly next to the storage facility.

This climate controlled self-storage facility is slated to have about 900 storage units.

The second article shared by Ellen Lentz was published June 18, 2021, for the National Association of Realtors, and is entitled Self-Storage Facilities Go Upscale. The following photo is contained within that article, and although not captioned as the 7.49-acres former Bon-Ton property at the York Galleria; Ellen’s husband recognized it as such; and the text of the article indirectly confirms it. I concur and have annotated it with a few blue labels to aid readers.

Springettsbury Township zoning initially did not allow a self-storage facility at the former Bon-Ton site. On February 27, 2020, Springettsbury Township Supervisors voted 3 to 2, in approving Ordinance No. 2020-1; which amended Chapter 325 “Zoning” to Permit Adaptive Reuse to Mini Storage Facility as a Use By Right in the Town Center Overlay and Commercial Highway District. The approved ordinance also expressly prohibits outdoor storage and truck rental of any kind, in addition a whole host of other strictly prohibited uses spelled out in 325-132.1 of the Zoning code.

The caption of the aerial photo of the former Bon-Ton property in the “Self-Storage Facilities Go Upscale” article states, “One advantage to locating self-storage facilities in empty mall spaces is the plentiful adjacent parking; some self-storage businesses even rent out parking spaces to owners of boats, campers, and other large vehicles.” Such renting out of these parking spaces, next to this Mini Storage Facility is prohibited per the Springettsbury Township Zoning code.

The Real Santa visits York in 1957