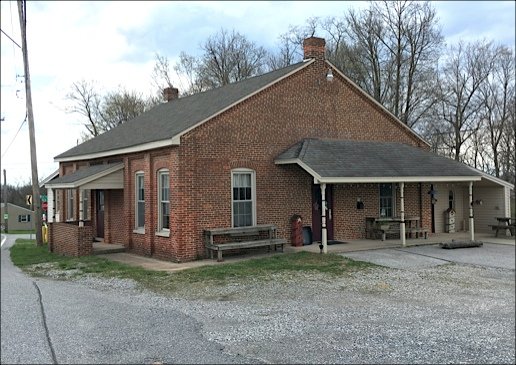 The Glades Auction House, located at 3409 Druck Valley Road, York, PA 17406, has served to repurpose The Glades 2-Room Schoolhouse. This historic structure will be the site of a History Night event on Wednesday April 13, 2022, at 7:00 PM. The topic of the talk is: “Early Schooling in Springettsbury.”

The owner of the Glades Auction House notes masks are not required, but are appreciated. If anyone is allergic to rabbits or cats, be forewarned they live in the house; although will be crated for the event. Chairs and benches will be available, however, depending on the turn-out; just in case, you may want to put fold-up chairs or lawn chairs in your car.

The YouTube video of the “Codorus Navigation Works” presentation at Springettsbury Township History Night on October 13, 2021, can be accessed through this link.

The YouTube video of the “Aviation in Springettsbury” presentation at Springettsbury Township History Night on July 14, 2021, can sbe accessed through this link.

Erma Throne Daron provides a common thread that runs through the four topics. As a student, she attended the Stony Brook One-Room schoolhouse. As a teacher, Erma taught at five schoolhouses within the township, prior to teaching at the Springettsbury Township consolidated school building.

After school district consolidation Erma continued in Central York School District, as predominantly a second grade teacher: at Springettsbury, at Pleasureville, at North Hills, and at Hayshire schools, before finishing a 44-year teaching career, during 1970, as a second grade teacher at Stony Brook Elementary School, located in Yorklyn.

Examples of Erma’s varied career are used to highlight aspects throughout the talk; one of which, 90-years ago, Erma Throne was a schoolteacher in the very building where the presentation is taking place. Then it was divided into two classrooms, with Erma teaching grades 1 through 4, all in The Glades Primary classroom.

The 1926 Millersville Yearbook photo of Miss Erma Throne is shown in a collage with correspondence announcing her appointment to continue teaching at Miller’s One-Room School in The School District of Springettsbury Township. Erma taught at Miller’s a total of 17-years, a span during which she married Franklin Daron in 1940.

Erma took an unusual path to attend Millersville. Erma Susan Throne was born in 1908. She started school during the 1914-1915 school-year. One of the advantages of a one-room school education, with eight grades all in one-room, was that teachers could easily conduct trial periods where they advanced apparently deserving students a grade in mid-term. If it worked out, the student stayed advanced one grade; and if it did not work out, the trial simply ended.

Erma Throne was able to advance two grades, finishing the eight grades in only six years; during the 1919-1920 school year. However the proof was passing the Eighth Grade Examination, which Erma did; allowing her to attend High School.

Erma attended Hallam High School, and even though again skipping a grade, she graduated as Valedictorian of the Class of 1923, as a fifteen year old. Erma needed to be at least 16-years old to enter Millersville. While waiting that year, Erma took advance classes with the senior class at Wrightsville High School, where she was also Valedictorian of the Class of 1924, as a sixteen year old.

After graduating with the Class of 1926 at Millersville, she was employed by The School District of Springettsbury Township four months later. Her first teaching assignment was in Miller’s One-Room School for the 1926-1927 school term. Followed by three terms teaching at Stony Brook One-Room School; the school she attended as a student.

The 1930-1931 and 1931-1932 school terms were taught at Glades Primary; followed by three terms teaching at Mt. Zion One-Room School. After which Erma taught for 16 straight terms at Miller’s One-Room Schoolhouse. The locations of those schools are shown on the following Territory Map of early schoolhouses in Springettsbury Township.

Every year, Erma Throne received a letter, during the summer, stating which schoolhouse she was elected to teach at during the upcoming school term. The following is the letter announcing the election of Miss Erma Throne to continue teaching at Miller’s One-Room School in The School District of Springettsbury Township; with a salary of $100 per month for eight months of the 1936-1937 school year.

The following 1952 photo shows Miller’s One-Room Schoolhouse, shortly prior to closing, following the 1951-1952 school year. After which, the circa 1857 schoolhouse was repurposed as a residence. It continues to stand today, along Heindel Road, east of the Strickler Farmhouse at the York County Prison.

The following newspaper photo shows the inside of Miller’s One-Room Schoolhouse, taught by Erma Daron; during first day of school in September of 1947. That year there are 21 students in grades 1 to 7, with no one in the 8th grade.

Within Erma’s Miller’s School items donated to Springettsbury Township Historic Preservation Committee by Cathy Stouch, there are some of her personal photos taken of students during the early 1940s, per developer date stamps on the back.

The greatest amount of detail is know about Erma’s photo of her 22 students at Miller’s One-Room School during the 1943-1944 school-year. The students are facing south, looking at the schoolhouse; with farm fields and the Rocky Ridge hills in the background.

During much of the middle 1940’s, Obe and Viola Johnson, a black couple and their two youngest children rented a cottage off of Ridgewood Road. Their children had started schooling in York, and now continued their education at Miller’s One Room School. Delores was two years younger than her brother Morris (Marty) Johnson.

At the right side of the 1943-1944 school-year photo, Delores Johnson is standing next to Gloria Bell; both are classmates in the sixth grade. There are no seventh graders and only a single eighth grader that school term; which is Morris (Marty) Johnson.

I’ve zoomed in on Morris Johnson in the following photo. After graduating 8th grade he lied about his age, in order to serve during WWII; Army—1315th Engr. His actual birthday is February 17, 1929. After the war, Morris was employed for many years at Mailman’s Department Store. Morris Johnson died in 1974, and is buried at Susquehanna Memorial Gardens.

Erma Daron began teaching in modern schoolhouses during the 1951-1952 school term when she taught third grade at the Pleasureville Consolidated School. Then the next school term Erma was one of the inaugural teachers at the Springettsbury Township consolidated school; teaching the third grade.

Please respond to this post if Erma Throne Daron was your teacher. Let me know where she taught you, and any memories you have of her.