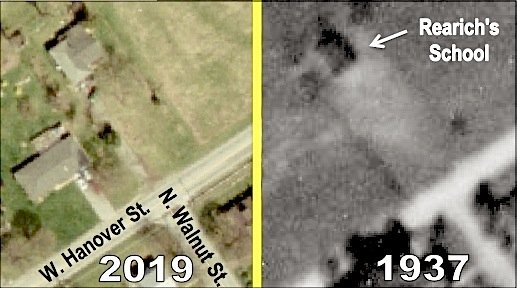 Students at Rearich’s One-Room School near Spring Grove took a field trip to Washington DC in 1951. What are your memories of school field trips to the nations capitol? My memories are from high school in the 1960s. I never realized pupils attending one-room schools took such trips.

Steven Rearich wanted to know were Rearich’s Schoolhouse was located in Jackson Township. He has a student photo when his Grandfather Raymond Rearich attended; and the photo also includes Raymond’s brother, George Rearich.

A Newspaper.com search provided the clue; which allowed an easy Deed search to precisely locate the school property. Quoting The Gazette and Daily of August 14, 1957: “The 60-year-old Rearich school building in Jackson township is being razed by the new owner, Charles Laughman, who plans to erect a dwelling on the site.”

The Deed search revealed: Charles A. Laughman acquired the one-room school site from Jackson Township School District on December 19, 1956; per Deed Book 44A, page 85. That deed noted two earlier deeds when the site was acquired to build Rearich’s Schoolhouse:

In all likelihood, an initial Rearich’s Schoolhouse was built near the road and first used during 1857. The “60-year-old, in 1957, schoolhouse was built behind the original schoolhouse, on the extended lot, in 1896; or 1897. That second schoolhouse was of brick construction per the following Rearich School student photo of November 1921; as published in The Evening Sun of Hanover, PA:

One-Room School naming usually is related to: who provided the land, who provided the most funds to build the school, the name of a school director; or a name associated with a nearby location or feature. The following section of Shearer’s 1860 Map of York County provides a clue of how Rearich’s was probably named.

The Blacksmith Shop (B.S.) nearly across the street from Rearich’s School was associated with the Rearich family. That location was likely known as Rearich’s and thus the school was named Rearich’s.

Lets look at Rearich’s students that took a field trip to Washington DC in 1951. The Gazette and Daily of October 8, 1951 reported on that educational trip, via bus, per the following article:

Quoting the opening paragraph of the article: “Pupils of Rearich’s school, near Spring Grove, one of the few remaining one-room schools, recently took an educational trip to Washington, D.C.”

I’d be interesting in learning about any other one-room schools, which took educational trips to Washington, D.C.