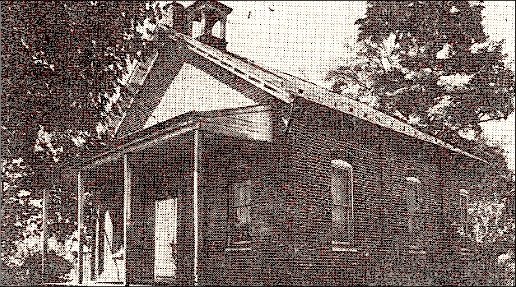 Mahlon Haines purchased Kreutz Creek One-Room Schoolhouse in 1951 with a vision of establishing a “School of Brains.”

In a post last month, I wrote Mahlon Haines purchased the Kreutz Creek One-Room Schoolhouse, on July 28, 1951, after it no longer was utilized as a school. His wife June had always admired that schoolhouse; he planned on it being an anniversary gift to her. The ultimate intended use is unknown or if any changes were made in preparation for their October 20th wedding anniversary. However after his wife, June Haines, died unexpectedly on September 24, 1951, Mahlon sold the schoolhouse shortly thereafter.

Haines’ ultimate intended use is now known; thanks to Jeff Clinton, of the Kreutz Creek Valley Preservation Society. He provided an article that appeared in the August 6, 1951, issue of The York Dispatch. It contained the following photo of the schoolhouse, within an article entitled: “Haines Envisions ‘School of Brains’ in Rededicated Kreutz Creek Building.”

Quoting the article in its entirety: “To preserve the spirit of the red brick schoolhouse, which in recent years has been rapidly losing ground in York County, a local shoe merchant plans to convert an abandoned one-roomer into a public lecture hall and call it the ‘School of Brains.’ Shoe man Mahlon N. Haines said today that he has purchased the former Kreutz Creek School, shown above, situated near the Lincoln Highway about eight miles east of York.”

“Haines now plans to establish a trust fund of $10,000 in the York National Bank and Trust Company to have the schoolhouse preserved ‘in memory and honor of those stalwart people who were educated there and developed their brains and principles of true Americanism, to be a School of Brains.’ According to his plan, directors of the school, which would invite ‘great men in every walk of life’ here to lecture, would be teachers of every county district, and of the city and Hanover districts, school administrators of the county, state and nation, heads of several nearby colleges and others.”

“Twelve representatives elected for five-year terms by the township teachers would become trustees to run the school. In addition, a Haines heir ‘shall always be a member of the board of trustees.’ Haines said the details are not fully worked out, but he feels that lecturers might be brought here weekly for sessions lasting an hour or more.”

“Persons 18 to 80 would be the pupils, Haines said. He added that he is approaching educators on the proposal. No plans to finance the lectures have been made. The schoolhouse, he pointed out, is on the site of the first church west of the Susquehanna River. A graveyard, containing ancestors of York countians, adjoins the building.”

After Mahon Haines wife died unexpectedly the following month, work on the “School of Brains” ceased. After which, Haines sells the schoolhouse at a Public Sale on October 13, 1951; Ervin and Pauline Emig were the buyers.

Links to a sampling of Mahlon Haines posts include: