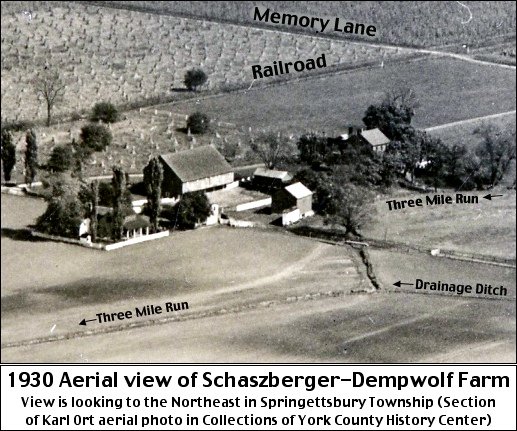 Dave Wiley asked if I had a photo of the Schaszberger-Dempwolf Farm. An historic aerial photo was easy to obtain from the Penn Pilot web site, however he specifically wanted a better view of the farm buildings. A zoomed-in section of one of Karl Ort’s aerial photos in the collections of the York County History Center provided this neat aerial photo of that farm in Springettsbury Township; it is a view looking to the northeast.

The whole aerial photo, from which this zoomed-in section came, was posted a year ago in this post: Karl Ort’s aerial photo of East York. The Schaszberger-Dempwolf farm buildings are centered in that whole photo, about one-third from the top.

Click on this LINK for a yorkblog.com Full View of the two original photos in this post if details are cut off in the cropping of photos, or if they have been removed from the ydr.com site.

The stream, known as “Three Mile Run,” which flows into Mill Creek, is located nearby the farm buildings. That is the stream that crosses Memory Lane and runs under the parking lot of the McDonald’s at the corner of Industrial Highway and Memory Lane. You can read more about that stream in the post: Naming of Three Mile Run waterway in Springettsbury.

Drawings and a photo of a 1916 gathering at the Schaszberger-Dempwolf Farm were recently donated to the Springettsbury Township Historic Preservation Committee. One of the drawings shows the metes and bounds of the farm. I’ve drawn those property boundaries on the following annotated March 19, 1938 Historic Aerial photo from the Penn Pilot web site. 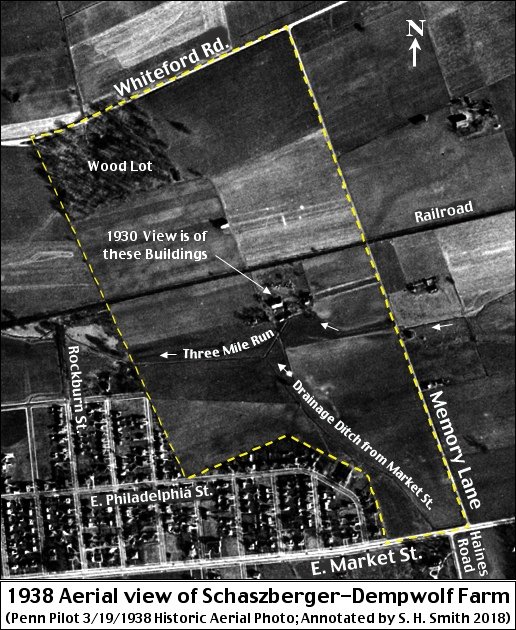 The eastern boundary of the 135-acre Schaszberger-Dempwolf Farm ran the whole length of Memory Lane in Springettsbury Township; stretching from frontage along East Market Street to frontage along Whiteford Road.

Newspaper articles from the early 1900s reported the intersection of Memory Lane (and Haines Road) with East Market Street easily flooded if it rained hard. An open drainage ditch from that intersection ran across the Schaszberger-Dempwolf Farm to Three Mile Run. One of the donated drawings shows a 1938 settlement with York County for the size of that drainage ditch to increase to 9-feet wide and 4-feet, 10-inches deep.

Look closely at the 1930 aerial photo at the beginning of this post. I know some will raise the question: What are all those things placed throughout the fields behind the buildings and north of the railroad tracks?

When I was young, my grandfather Barshinger occasionally let me help harvest corn in his field besides our house. He harvested by hand. The corn stalks were left standing. Eventually the corn stalks were cut off at the base and tied together in bunches, to dry out further; ultimately becoming livestock feed.

Those corn stalk bunches could be what is seen throughout the Schaszberger-Dempwolf Farm fields. Another possibility could be straw bunched together following the harvest of wheat.