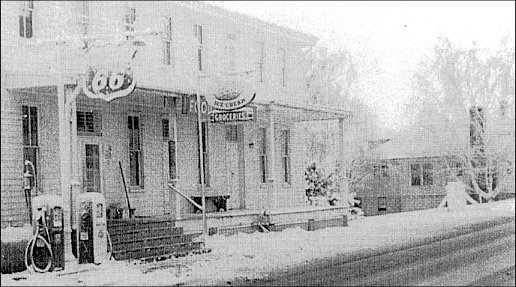 Joyce Runkle submitted photos of Walters General Store which doubled as a Yorkana Phillips 66 Gas Station and is skillfully captured in artwork by Cliff Satterthwaite.

Joyce, from Springfield, Missouri, discovered the John Walters Store photos in some family history work that had been underway by her late Mother. Joyce e-mailed: To the sheet of these photos, only identified as John Walters Store, was a paper-clipped note written by Mom: “This is one of my favorite roadside concerns we stopped at when Pop took our family back east in 1954. After paying our respects at the cemetery, we stopped here for gas, and by chance, learned about the Yorkana Campmeeting, once held nearby. We stayed a few days in traveler rooms on the second floor, while taking delightful breakfasts in a corner of the store. The proprietors were welcoming and entertaining hosts. We felt like family!”

Joyce Runkle concluded the e-mail: “I had no idea what a Yorkana Campmeeting was until I Googled it and saw your post. I’d be grateful to learn about these photos and the store proprietors.”

As soon as I saw the photos, I recalled memories of that distinctive storefront, along a section of East Prospect Road, near Yorkana. I also remembered Cliff Satterthwaite flipping through York countryside paintings on his computer several years ago, and when the store image appeared, I said something like, “wow, stop, I know exactly where you painted that”.

I sent the photos, submitted by Joyce Runkle, to Cliff Satterthwaite. He immediately replied, submitting the photo of the plein air watercolor he created on-site in the mid-1960s. Cliff sold the painting to the store owner for $850. Cliff considers this one of his BEST large plein air paintings.

Walters General Store, sold groceries, hardware, garden items, Phillips 66 Gasoline, and a variety of other items. Also, per Joyce Runkle’s feedback, in 1954 the store appears to contain an early type of Bed and Breakfast.

The proprietors of the store, through the 50s, 60s and early 70s were John and Sarah Walters. John H. Walters [1910-2002] was the co-owner and operator, with his wife Sarah (Aldinger) Walters [1915-2004]. They were married for 67 years. John Walters is noted as a life member and founder of Our Gang Riding Club. That horse riding club still operates along Gun Club Road and is the neighbor to the east of the former Yorkana Campmeeting Grounds, thus John was undoubtedly aware of the Campmeeting Grounds history. Which is possibly why Joyce Runkle’s grandparents ended up staying at the Walters Store; to hear about that history.

After creating the store painting for John Walters, Cliff Satterthwaite also created paintings of a house on a farm and a nearby barn in the Yorkana vicinity. John Walters purchased the house painting because it was the homestead for either: his father, an uncle, or another relative. Cliff is not sure who purchased the barn painting, which was on the same property as the house.

Cliff remembers roadwork going on during the time the house and barn were painted; likely mid to late 1960s. The road was diverted to go by the house; while access to the barn was via a different road. If any of my readers can identify either of these buildings, please comment.

On July 9, 1973, a public sale was held at Walters Store, as the store went out of business. The remaining stock of groceries, hardware, garden tools, shelving, counters, display cases, i.e. everything inside the store, was sold to the highest bidder. The property was sold, and the building demolished to make way for a Turkey Hill Convenience Store.

The Cliff Satterthwaite artwork is used with his permission. Cliff lived in York County, PA, from the mid-1950s to the early-1980s, creating a host of artwork, with much done live on location. He has a book available containing nearly 400 images of his artwork from that time period; e-mail contact is: cliffsatterthwaite@gmail.com

Links to related Yorkana posts include:

Love blossoms at a Yorkana Campmeeting

Roy Rogers in York and at Valley View Park, near Yorkana

2 comments on “Satterthwaite artwork of unique store near Yorkana”