Santa’s arrival by airplane at a Springettsbury Township airport in 1946 started a York tradition. That year was the launch of over a quarter-century tradition involving Santa Claus’s arrival at the start of the Christmas shopping season in York, Pennsylvania. The arrival by airplane was followed by a parade to the downtown Bon-Ton Department Store. The festivities culminating with Santa climbing the Fire Company’s big aerial ladder into an upper story window to make his headquarters in The Bon-Ton Toyland.

In 1952 The Bon-Ton Department Store advertised Meet Santa’s Plane at Continental Airways Airport along the Lincoln Highway East opposite Playland. The York County History Center contains this photo of Santa getting on his Sleigh Float after arriving by airplane on Saturday November 22, 1952, at 9:00 A.M. From there the Santa Parade traveled township and city streets, culminating with Santa climbing the fire company’s aerial ladder into an upper story window of The Bon-Ton.

Details of the earliest Santa flights to The Bon-Ton

Newspaper articles note construction of the hangar of Valley Airways began in 1944; with the airport opening in 1945. There were three grass runways with the longest 3,300-feet. These runways occupied much of the site of today’s York Mall and of the Warehouse on its east side; set back from East Market Street, all the way north to the railroad tracks. The following logo for the airport notes they were a sales and service location for Piper Cub, Ercoupe and Navion airplanes. 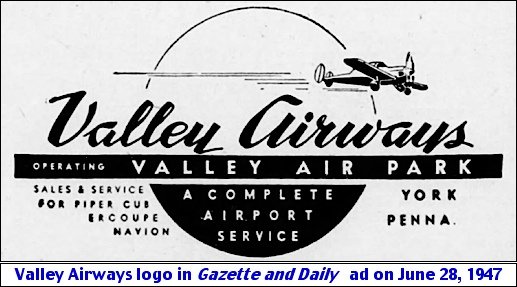 In a multi-year search of York newspapers the earliest Bon-Ton “flying-Santa” appears to be advertised for the 1946 Christmas shopping season. Quoting a few lines from the following Wednesday, November 27, 1946, Gazette and Daily ad: “Meet Santa’s Plane at Valley Airways Airport, East Market Street, Opposite Playland.” “Santa will Land on Thanksgiving Morning at 10:30 A. M.” In the parade, Santa’s Sleigh Float will be “accompanied by the York City Band. He will have a large mail box with him and Boy Scouts will collect letters for Santa as Santa travels slowly on his sleigh.”

The end of 1952 saw the Pennsylvania Railroad purchasing the York Whitehull Airport site. Initial plans were for a large freight rail yard on that land in Springettsbury Township, however the rapid shift away from rail freight to truck freight quickly killed those plans and the land was sold to commercial developers.

In conjunction with posts of several years ago, I got comments asking about exact locations where certain structures were located in terms of today’s landmarks. Included among those requests were the main hangar for the York Whitehull Airport and The Barn, a popular garden store in a neat barn located east of Ye Olde Valley Inn.

I’ve annotated and compared an October 9, 1955, historic aerial photo, from the York County Archives, to a 2016 Bing.com aerial photo in the following frames. The top frame is a 100% exposure of the 1955 aerial. The progression of frames blends lesser exposures of the 1955 aerial, with greater exposures of the 2016 aerial, until the final exposure is 100% the 2016 aerial.

By 1955, many of the airport hangars located east of the main hangar were already removed, however the main hangar still stood; that is the hangar seen in the November 22, 1952 photo of Santa getting on his Sleigh Float. The progression of frames shows the entrance to the main hangar was pretty close to where Panera Bread is now located. Likewise, The Barn garden center was located where the pavement now exists between Chick-fil-A and Home Depot.

In the 1955 aerial photo, note the annotated “former Private Hanger” at the left side of the view. This hanger was not involved with the sale of the airport to the Pennsylvania Railroad and the structure still stands today. Valley Canvas operated a business there for many years and more recently Office Furniture Today operated there at 50 N. Northern Way. I’ve pointed out that “former Private Hanger” in the following full frame view of the York County History Center photo of Santa getting on his Sleigh Float after arriving by airplane on Saturday November 22, 1952, at 9:00 A.M.

Links to past Christmas posts: