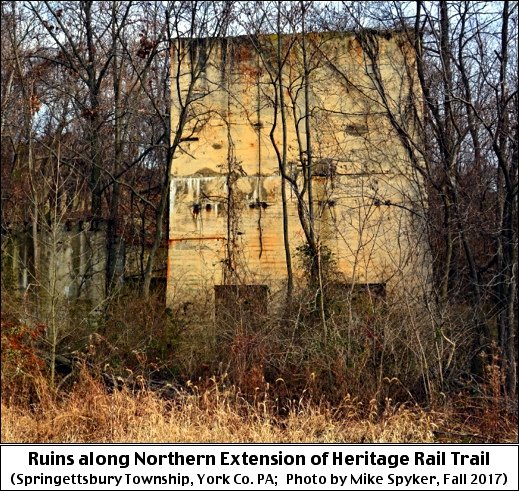 Massive ruins stand along the northern extension of the Heritage Rail Trail County Park within Springettsbury Township. These ruins are on the east side of the rail trail, over the railroad tracks, and located about three-quarters of a mile north of the Loucks Mill Road parking lot at Route 30. That location is just before the rail trail curve, where it runs under Black Bridge.

Last year Mike Spyker took this photo of the largest structure within these ruins. Since it was adjacent to Kinsley Materials, he asked and they said it was an old “sand mill.” Click on this LINK for a yorkblog.com Full View of the three original photos in this post if details are cut off in the cropping of the photos, or if any have been removed from the ydr.com site.

Every time I walked past those ruins, I wondered about their use; however doing anything about it remained a low priority. After Mike shared the “sand mill” clue in December; solving the “mystery of the rail trail ruins” bubbled to near the top of my research list.

I remembered several paragraphs in the Springettsbury Township Centennial book describing sand quarries. Quoting from the beginning of those paragraphs; on page 117: “Sand from the disintegrating chickies quartzite has been quarried at several locations in the vicinity of Pleasureville. The largest quarries, located three-quarters of a mile west of Pleasureville, are known as the Elmer B. King & Bros., and Neuman Sand & Supply Company.” When the Centennial book was published in 1991, it was noted York Stone & Supply Company now owned those overgrown properties, that still had the potential for quarrying sand; as Kinsley Materials is doing today.

Utilizing those company names as a starting point, my research moved to the York County History Center, where I discovered two 1940s photographs, in the History Center collections, that matched the location of the ruins. The following Army Corps of Engineers photo, dated September 4, 1942, was annotated by the Corps as taken from the “top of building of Neuman Sand and Supply Company, looking upstream,” i.e. looking southward along the Codorus Creek. 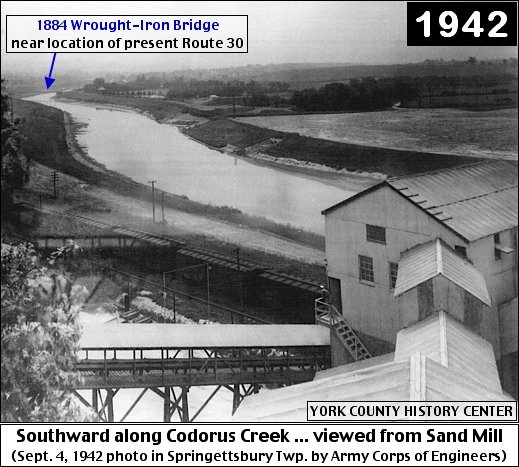 Further research revealed a small capacity sand mill was located at this site going back to the mid-1800s. The initial sand mill appears to be a sideline business for farmers Charles Diehl and then Thomas Diehl. Henry L. Neuman got into the building sand business, at this site, in 1905. Within ten years he had improved capacity of the sand mill to 12 tons per hour.

In 1915, the Neuman Sand and Supply Company was chartered with a capitalization of $25,000 for the purpose of making extensive improvements to their sand mill, in order to increase capacity to 40 to 50 tons per hour. That 1915 sand mill is the one seen in the 1940s photos.

The May 12, 1915 issue of The York Daily describes the New Neuman Sand Plant: “Samuel Hake was the contractor in charge of the erection of the new plant and the concrete work was done by Spahr Bros. The building has a concrete base and is covered with corrugated iron. It covers 6,570 square feet. The first section consists of a hopper or receiver with a capacity of 80 tons. It has an automatic feeder, a champion and an intermediate crusher. From the crushers the sand stone goes to the finishing rolls and then onto the screens. A conveying belt 220 feet long conveys the product to the hoppers, which are used to load the [railroad] cars. The plant is operated by an 85 horse power motor.”

“When in full operation the Neuman plant employs 15 men. The Neumans have been in the sand business for 10 years. Their product, as now turned out, contains 93 to 95 per cent pure silica as is shown by a test made by the Sandusky Portland Cement Company. A 28-day test shows the tensile strength of the sand to be 487 pounds to the square inch. It is of uniform grain. This sand has been approved for use on the sewage disposal plant and on the state highways. It is used by the York Railways Company, the Edison Electric Light, Heat and Power Company, the Standard Chain Works, and by numerous contractors.”

The following photo is a view, looking northward along the Codorus Creek, when standing on the newly built 2-lane Arsenal Road bridge. The September 1948 photo was taken to show the removal of the single-lane 1884 Wrought-Iron Bridge, just downstream; however the Neuman Sand & Supply Company plant can be pointed out in the background. 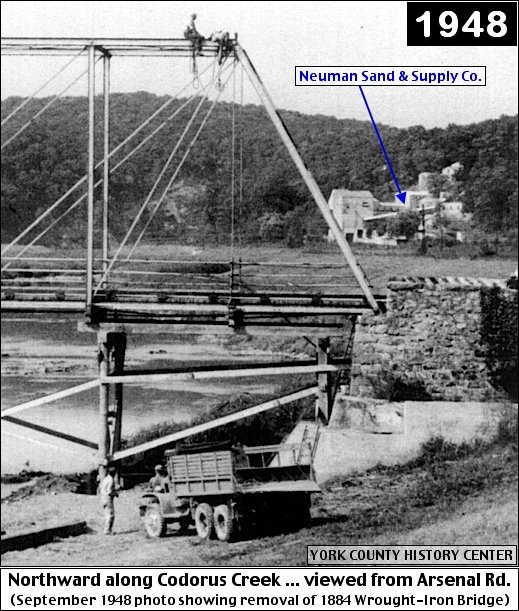 On August 3, 1967, the Neuman Sand plant was totally gutted by fire, believed caused by lightning. It was the largest of several York area structures damaged during a severe thunderstorm that dumped a half-inch of rain in 25 minutes. After the clean-up of pieces of scattered, melted tin, which had covering the wooden structure; all that was left were the massive concrete foundation of the main building and sections of concrete support footing crawling up the side of the hill.