S. Morgan Smith owned a Grist Mill, located in the extreme southwestern corner of Dover Township, where Big Mount Road crosses the Conewago Creek. This Grist Mill went by several names, including Ort’s and Diehl; however Bigmount is the name most often used.

A photo of Bigmount Grist Mill appeared on The Gazette and Daily Calendar for the months Nov. 1952 – Jan. 1953. Research by Grant Voaden indicates this mill was built in 1783 and was last run by waterpower in 1931. Long since used as a mill, the structure still stands at the sharp bend in Big Mount Road, just before it passes northward over two truss bridges, taking one over the Conewago Creek into Washington Township.

S. Morgan Smith died April 12, 1903 and his estate included this 12.7-acre property, with Grist Mill and other buildings in Dover Township. His son C. Elmer Smith, always owned half interest in this mill; ever since father and son purchased it jointly in 1888. S. Morgan Smith’s estate was shared equally by six heirs, including C. Elmer Smith; who then owned seven-twelfths of the Grist Mill property.

A petition by the widow and heirs yielded an order for the sale of their half interest in this real estate to C. Elmer Smith. The following signatures of the widow Emma R. Smith and her six children appear on this October 27, 1903, petition; they are from an original in the collections of the York County Archives. 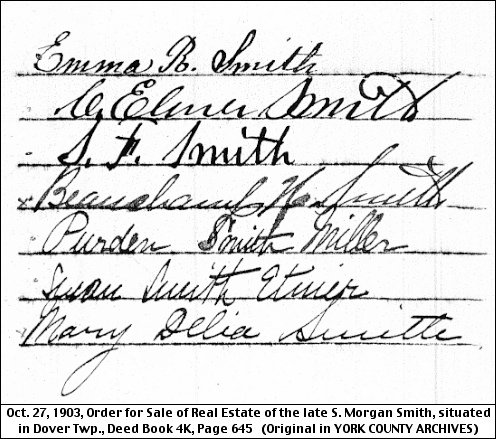 The signatures are of Stephen Morgan Smith’s widow Emma Rebecca Fahs Smith and their six children:

As for S. Morgan Smith’s signature, one of my earliest eBay purchases (number 3) was an August 15, 1884, collection letter; handwritten and signed by him. This signature is typical from about 1881 until his death, i.e. during the time period when he emphasized his middle name.

In this letter S. Morgan Smith is writing to the A. E. Patton Bank in Curwensville, PA; asking their help in collecting money owed to him from customer J. Hipps & Son of Lumber City, PA.

Curwensville and Lumber City are both on the West Branch of the Susquehanna River in Clearfield County. Lumber City is six-miles upriver from the much larger town of Curwensville.

S. Morgan Smith asks the bank to send him the amount owed, “less a reasonable amount for your trouble. By so doing you will oblige yours truly.”

Grant Voaden discovered a note card that contained a mill drawing that matched his observations and photos of Bigmount Grist Mill. The following copy of this drawing is from the Grant Voaden File GV-103 at the York County Heritage Trust. 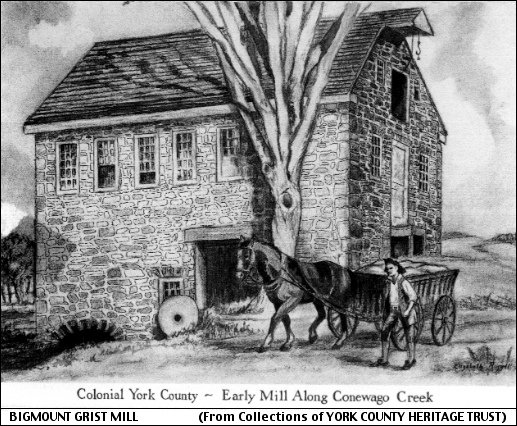 The lower right side of the drawing contains the name of the artist; shown here, enhanced and enlarged. If any of my readers can share information about Elizabeth Russell, please comment.