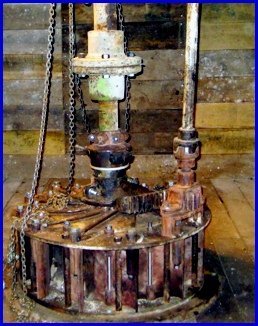 Overshot water wheels are out in the open and are more photogenic.  Turbine water wheels spend their life underwater and only appear when the water is drained to clean out debris that collects in the penstock.

In the News-Comet article, through conversations and correspondence with Birdes A. Jacobs, Grant Voaden wrote S. Morgan Smith delivered his first Turbine Water Wheel to Amos G. Jacobs’ grist mill near East Berlin in 1877.  Jacobs Mill was located about a mile southeast of East Berlin, just inside Paradise Township, York County, near the current crossroads of Jacobs Mill Road and Beaver Creek Road.

The turbine was mounted on a plank floor at the bottom of a vertical 15 ft. deep wooden “penstock” about 3 ft. square made of sawed planks with oak posts at the corners shaped at the lower ends to rest squarely on the natural rock and tied together with long bolts.  The planks were first on the inside but Mr. Amos Jacobs later thought the “penstock” was too small so he removed them and spiked fresh sawed oak planks onto the outside of the posts.  It then matched up better with the “trunk” or inlet to the “penstock” and probably gave more power; because the “penstock” should have been at least 50” square.

The planking at the bottom of the “penstock” at the wheel was at an elevation such that the bottom of the wheel was 3” below tailwater to keep out ice.  Between posts the tailpit was open on 3 sides, the rear closed by rock.  The bolts or rods between the corner posts on the inside of the “penstock” could be used as a ladder to descend to the wheel to clean our brush, leaves and many times eels.  It cut up the inside of the eel into sections ready for the frying pan but the hide of the eel was too tough.  Dried eel hide made unmatched belt lacers and was usually used to tie the flail to the staff for threshing rye, for the straw and to tie corn shocks and sheaves of corn fodder.  Sometimes the eels were so plentiful they would almost stop the wheel.

The upright shaft from the turbine had an 18” pine pulley on it from which a 10” leather belt ran to a 4 ft. dia. Pulley on another upright shaft in the mill proper from which a short belt ran to the spindle of the chopper stones.  The turbine also could be connected through gears and pulleys to a corn crusher and to the buhr stones used in making wheat flour.  The turbine ran too fast (about 269 RPM) and had to be reduced to handle the 42 inch stones which ran at about 150 RPM and the chopping stones at about 100 RPM.

Birdes A. Jacobs, now 74 years old, still in remarkable health and working regularly, is the 16 year old lad on horseback second from the left on the cover picture.  At the age of 12 he began working in his father’s mill and continued till he was 30 when he went to Washington, D. C. to take over his deceased uncle’s Millinery Business.  His father Amos had 40 acres of good land and the mill.  By day, Birdes worked the farm and by night “from 8 o’clock in the evening till 2 o’clock in the morning tried to make $1.00 for Dad in the Mill.”

This Mill in his time was better known as “Jacobs Factory” because of its great variety of products and also to distinguish it from another Jacobs Mill owned by George G. Jacobs, a brother of Amos which was located in Heidelberg township on Oil creek.  Jacobs Factory was located in Paradise township, York county, close to the Adams county line about 2 miles southeast of East Berlin and drew its water power from Beaver creek.  Mr. Jacobs knows it was here that S. Morgan Smith installed the first Success Runner—the buyer Amos G. Jacobs—the terms unknown—the date 1877.

It is claimed by some historians that the first Mill at Jacobs was built by George Jacobs about 1750.  Mr. Birdes Jacobs, however, is sure that this is only partially correct.  George Jacobs’ father, Henry, the original settler, moved to that vicinity in 1749 but “he was kept too busy clearing the land and keeping his scalp on his head” to develop the water power.  It was not until about 1772 when his son George Jacobs I moved from Berks county that the first Mill was built at this site.  George was considered a wealthy man for those days and built a fine stone house and then a dam, races and a small mill.  So according to the Jacobs family history the first mill was built by George Jacobs I but not until about 1772.