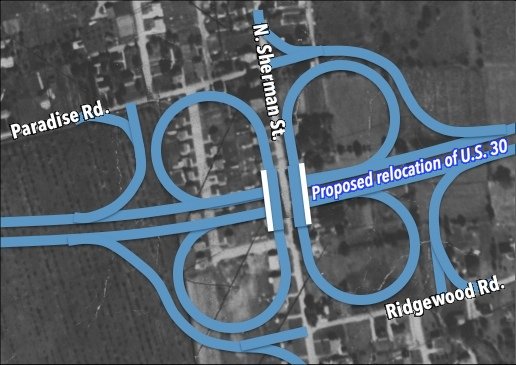 James Fishel is the latest to comment about the 1959 proposal for a Route 30 cloverleaf interchange at North Sherman Street. In 2020, I initially wrote about that interchange, using specifics Don May recalled about the State proposed plan to construct a real East-West Bypass of York; i.e. four-lanes, limited access, with NO traffic lights.

Since the 2020 post, I’ve collected e-mails from Bill Paules, Karen Harris and Ken Jacoby. Their comments and submission are included later in this post. The e-mail from James Fishel was the tipping point, which prompted this post; here are his comments from a few days ago:

“I grew up on the 2100 block of Pleasant View Drive, on top of Pleasureville, just off of North Sherman Street. My Mother and Father built their first home on that street. Our house was one of three ranchers built by Glen Grove who lived in one of them. We moved into the freshly built house in 1957, when I was three.”

“I remember the conversations my Dad would have with his folks and In-laws concerning the [1959] proposed location of the ‘new’ route 30 by-pass which perhaps might take our house and we’d have to relocate.”

“He arrived home from a meeting, think it was at the Springettsbury Township building where presentations and discussions of the proposed Rt. 30 was planned for just feet from our house were voiced. We were the second house on the right on Pleasant View drive just up from where the cloverleaf interchange was to empty out onto Paradise Road. He was somewhat distraught as to what the future held for us and our surrounding neighbors.”

Using tips provided by Don May and Newspapers.com, I discovered the following illustration of that 1959 State Highway proposal to relocate U.S. Route 30, as a true East-West Bypass of York, and used in the 2020 post. Per a request from several readers, I’ve since pointed out a few of the key roads.

Bill Paules concurred, “Your newspaper clipping is correct. My father always told me the honest-to-goodness 30 bypass was supposed to go north of Ridgewood and Alcott [Roads], with Sherman [Street] getting the intersection and Mount Zion [Road] getting the overpass.”

Karen Harris agreed, “My father worked at the Naval Ordnance Plant and recalled management heavily favoring Sherman Street as the main interchange for east york. They wanted that short trip out the back of their plant along Paradise Road to that interchange.”

My statement in the original 2020 post, “eventually headed west though present day Rocky Ridge Park”, was made per a September 22, 1959, York Dispatch article, which reported: “In York county, the new highway will lead from the river bridge west along the high southern slope the range of hills which overlooks the York valley, swerving slightly north in the Pleasureville area to reach the proposed new bridge over the Codorus.” Since this York Dispatch article appeared a month prior to the illustration in The Gazette and Daily, it is possible the placement of the new road was simplified during that month to instead go west through the York Valley and only head up along the southern slope of the hills nearer to Mt. Zion Road.

Ken Jacoby went above and beyond, to illustrate the details shared by his uncle, by combining two topographic maps, a 1964 (upper part) and a 1954 (lower part) for the region of Springettsbury Township; east of Mt. Zion Road. The dashed line is the 1959 proposed York Bypass. The solid line is the present 4-lane Route 30.

Newspaper articles state Buchart Engineering Corp. is designing the bypass for the State Highways Department. I wonder if any of those drawings were saved; if so, they would provide the most accurate history of the Route 30 cloverleaf interchange at North Sherman Street.

In 1959, Buchart Engineering Corp. was located at 611 West Market Street in York. That company evolved into Buchart Horn at 445 West Philadelphia Street in York.