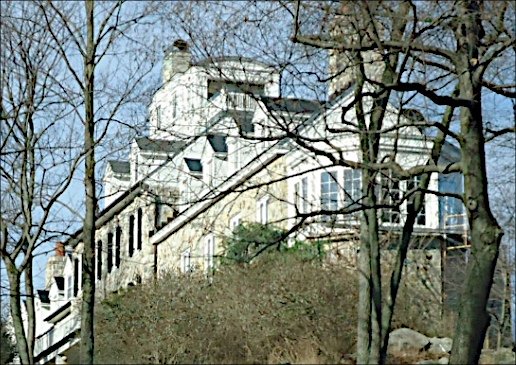 Roundtop is a massive mansion, which sits atop the 800-foot elevation hilltop known as Round Top in the Hellam Hills. The present structure is the result of numerous additions to an original three-story stone house completed in 1894 and utilized as a resort in its early years. Currently Roundtop is on PRIVATE PROPERTY; the photo at the beginning of this post is from the publicly accessible York County Property Viewer, within the York County Tax Assessment web site.

In terms of present surroundings, per the westward looking photo, that concrete Lincoln Highway marker would have been placed opposite the end of Blessing Lane in Hellam Township; which is 0.4-miles west of the Cool Springs Road / Cool Creek Road intersection with the Lincoln Highway (Route 462).

The name of a road in the 1800s and early 1900s occasionally changed. Old road maps, property deed research, and newspapers.com can be used to determine the general timeline of the name changes; which was done for Round Top Road in Hellam Township.

The following 1908 Topographic Map is used to point out the how Round Top Road progressed to Blessing Lane; as the road opposite where the concrete Lincoln Highway marker was placed in 1928.

I have drawn red and green arrows to the road known as ROUND TOP ROAD as early as the 1920s. However some time in the 1930s the road name was changed to Blessing Road; which seems to coincide with the era when Roundtop becoming strictly private.

Roundtop was originally the name of the summit and stone house. Early maps use Roundtop, these even included the USGS Topographic Maps. However by the 1940s, the summit was generally changed to the Round Top spelling; with the stone house retaining the Roundtop spelling.

York County Deed Book 9L, page 404 records the April 15, 1892 purchase of the Roundtop property by Robert Zanker, of the Borough of Marietta; he purchased it from Simon C. Collins of Marietta. Early newspaper accounts report Robert Zanker used to row across the river, scale the rocks, and visualize his dream home up on top of the hill.

Roundtop, the three-story stone house on that hill top, was completed for Marietta Jeweler Robert Zanker, by David Gromling and sons in 1894; is shown in the following circa 1915 postcard image.

The Roundtop house appears to have started out as the summer residence of Robert Zanker, however it is soon described as the famous summer resort. As use of the resort increased; that is likely why the Round Top Road, off of the Lincoln Highway was so named. An early brochure notes rooms are $1.50 per night and alludes to a marked path from Roundtop down the hill to the nearby Accomac Inn.

Robert Zanker was a Marietta jeweler and watch-maker for more than 50-years. He died in 1925, with his obituary in the March 13, 1925 Intelligencer Journal of Lancaster noting: “He was instrumental in the development of Round Top, across the Susquehanna River from Marietta, as a summer colony and resort.” From 1913 until 1926 Roundtop was leased out as an Eccentric Authors Colony.

The Roundtop house had fallen into disrepair and in 1928 Adam Greer offered to lease the house and grounds to the Government as a rehabilitation hospital for veterans. That may have been an offer, in hopes of getting funds to do the necessary repairs; however that use never materialized.

York County Deed Book 25L, page 601 records the July 14, 1933 purchase of the Roundtop property by Philip G. Loucks, and wife Marguerite; from Adam H. Greer and wife Sarah. The deed notes Philip and Marguerite were of City of Washington, D.C.; however they grew up in York. Interestingly as part of a York High Class of 1917 picnic, they were among a group that hiked up to Roundtop; where reportedly Phil Loucks turned to his friend, classmate, and future wife Marguerite and said: “Someday I’m going to own this place.”

A lot of work was involved in fixing up the house. Only the 27-inch thick exterior structural stonewalls could be reused. Everything else was gutted and replaced with steel beams and cement floors. The Philip Loucks family moved in full time during 1941. The following photo shows the house in 1985; which at the left side shows the first addition to the house, by Philip Loucks during the 1950s.

Following the death of Philip Loucks in 1965, son Michael Loucks and his wife Judith were the next owners of Roundtop. Judith Loucks opened the Roundtop Bed and Breakfast in 1985 and it operated into the 1990s.

About two decades ago, the next owner started enlarging the original 1894 three-story stone house. The following, directly overhead Google Earth view gives an idea of the size; which scales to about 175-feet long.

The following is a Google Earth View of the Hellam Hills, LOOKING WEST along the Susquehanna River, with the 800-foot elevation hilltop known as Round Top in the foreground. Pointed out are the east end of Roundtop mansion and Accomac.

In the July 24, 2012 Only in York County post by Joan Concilio, she fields questions about the huge structure high on the hill across from Marietta. In Joan’s reply, she wondered about that building herself and remembered taking a photo.

In the March 19, 2013 Only in York County post by Joan Concilio, she provided comments about Roundtop by several of her readers.