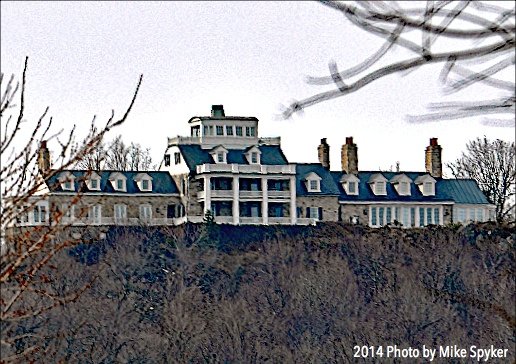 Roundtop mansion, as photographed from Marietta, Lancaster County in 2014; after it was much enlarged from the original 1894 three-story stone house. It sits atop the 800-foot elevation hilltop known as Round Top in the Hellam Hills of York County. (March 14, 2014 photo by Mike Spyker; lens utilized was a Nikon 200 x 500mm, zoomed out to the max.)
Posted by Stephen H. SmithSeptember 21, 2022 All Posts, Buildings, Lancaster County, Pennsylvania, Personalities, Roads, Susquehanna River, Various Locations, York County

A previous exploration of Round Top Road to the hilltop property, north of Wrightsville, was done to understand the placement location of a concrete Lincoln Highway marker in 1928. In response to that post, Mike Spyker shared a telephoto of the Roundtop mansion, taken from Marietta in 2014. And, Gwyn Moore submitted a postcard, with questions, related to a relative that worked on that property.

Gwyn Moore shared; “Passed down through our family is a postcard with the lettering (STONE HOUSE ROUND TOP, YORK, PA) under a photo (or painting?) of a stone house with a second floor balcony. The only identification on the back is (Made in Germany 248/139).”

“The postcard was a keepsake of a relative. I remember Dad telling me a little about that card only once. After I came across it when I was young. The thing I remember is something about a relative digging up potatoes, onions and beets, and hauling them to this house where famous people lived.”

“I always assumed that house was somewhere near Round Top mountain, of Ski Round Top fame, until my sister recently saw your post. I stand corrected, since our postcard matches the black and white one in your Roundtop article. Who were the famous people?”

I knew that the author T. Everett Harre stayed at Roundtop to write one of his books (One Hour – And Forever), in which he featured various rooms in the house. A search of the Internet and articles via Newspaper.com provided additional insight.

Thomas Everett Harre was born in Marietta, Lancaster County during 1884, and became internationally known as a bestselling novelist; after gaining experience as a journalist and author of magazine articles. His major works include:
The Eternal Maiden (1913)
Behold The Woman! (1916)
One Hour – And Forever (1925)
Beware After Dark (1929)
The Heavenly Sinner (1935)
You Can Not Miss That Inn (1939)
Theresa Neumann – The Mystic Maid (1939)
The Treasury Of Love (1945)
The Little Poor Man of Graymoor (1947)
Heroes Of Peace (1947)

T. Everett Harre started his career at 10-years old, writing an initial article for his hometown newspaper; the Marietta Times. He moved on to reporting for the Philadelphia Press and rapidly made a name for himself as State journalist by his coverage of the “Capitol Graft” scandal at Harrisburg. Those stories landed him a commission to do a series of articles for Harper’s Weekly.

Mr. Harre later joined the staff of Hampton’s Magazine, where one of his early editors was the eminent American novelist, Theodore Dreiser. At the age of 25, T. Everett Harre went into the Northland to meet Robert E. Peary on his return from his eighth Arctic expedition. Collaborating with Elsa Parker, Mr. Harre secured the serial rights of an exclusive story on the trip to the North Pole. In his background research for those articles, T. Everett uncovered key supporting stories in London; associated with polar exploration.

At the age of 29, Mr. Harre was serving as literary and dramatic critic of the Philadelphia Evening Ledger, when his first novel (The Eternal Maiden) was released. The Eternal Maiden created an over-night sensation and was a runaway bestseller. It put his name in newspapers across the country. In checking out those statements via a countrywide newspapers search, the following article was discovered in The San Francisco Examiner of May 26, 1913:

“MARIETTA (Pa.), May 25.—Round Top, a mountain resort near here, has been leased by T. Everett Harre, the author, who is acting for a number of novelists and poets intending to establish a colony there.”

“In addition to literary labors the colonists will raise beans and onions, at the same time following lines of Greek culture similar to those instituted in Germany by Isadora Duncan.”

“A flavor of ancient sun worship will be introduced by the colonists, who propose meeting on the roof at daybreak, when poems will be read and songs chanted in salutation of the rising sun.”

A farm, on the original Round Top property, was located along the private road, leading up to the Roundtop stone house. During the first few years, Roundtop was mainly a summer only get-away for the colony. During that time, T. Everett Harre’s primary residence was New York City.

T. Everett Harre maintained a lease on the Roundtop property through 1926. Newspaper articles have him residing there occasionally during seasons other than summer. Some of the gatherings at Roundtop between 1913 and 1926 are noted in newspapers; however with little detail. The articles usually only noted from which cities the guests were from.

This is Mr. Harre’s publicity photo, upon the release of his first bestselling novel in 1913, at the age of 29.

Mr. Harre’s second novel (Behold The Woman!) was an even bigger success than his first novel. It was published in multiple languages. In addition he closed two contracts for the dramatic and moving picture rights to that novel. Both on the stage and on the screen, Theda Bara starred as the novel’s heroine. Theda was a film star of the silent movie days.

During work on his novels, T. Everett Harre continued to write for a number of national magazines. He was also well-known as a ghost writer and among his “subjects” he numbered Mary Garden, Marconi, Rudolph Valentino, and Mrs. Eleanor Roosevelt.

Thomas Everett Harre died in New York City in 1948 at the age of 64. He is buried in Marietta Cemetery.