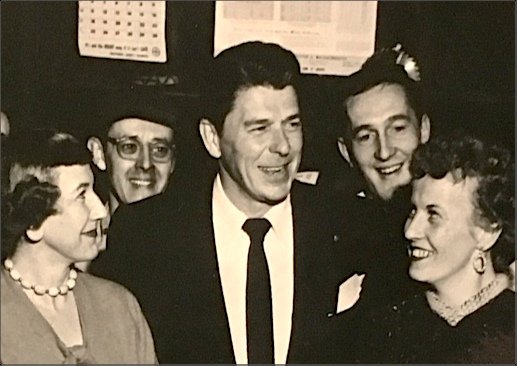 Reagan’s visit to Harley-Davidson, on May 6, 1987, was heavily chronicled via photos and videos. There is a YouTube video of his remarks to the employees; courtesy of Ronald Reagan Presidential Library. Ronald Reagan’s visit to the General Electric plant at 463 South Albemarle Street, in the east end of York, on March 13, 1957, was photographed by J. David Allen.

The introductory photo is part of the J. David Allen collection; which is presently being cataloged at the York County History Center. It shows Ronald Reagan at the General Electric plant in York, surrounded by company employees; likely in a shop area. Unfortunately none of the employees are identified. Do any readers recognize any of the individuals?

Another of the Allen photos appeared in The Gazette and Daily of March 14, 1957. Those individuals were identified; and by use of a 1957 Directory of York, the positions, of three of them, at the GE plant were discovered: Mrs. Sandra Pike (clerk), Mrs. Anne Peters (stenographer), and Mrs. Clara Ream (typist). Therefore that photo was likely taken in an office area.

Ronald Reagan became a spokesman for General Electric in 1954, when he was hired to host the national TV program “General Electric Theater;” a half-hour CBS dramatic show, airing every Sunday evening at 9:00 o’clock.

For the show, from 1954 until 1962, in addition to the celebrity guests, Ronald Reagan and his “progress reporter” Don Herbert, gathered news on General Electric’s contributions to progress through research, engineering and manufacturing skill. During the eight-years the program was broadcast, for 208 show episodes, Reagan and Herbert visited more than 130 General Electric labs and factories.

The following is a wider view of introductory photo. Do any readers recognize any of the individuals, that worked at the General Electric plant in York during 1957?

Reagan’s visits to local General Electric plants, also often involved speaking to a civic organization in the area. Such was the case in York. Reagan’s day in York included: speaker for the noon luncheon of the Rotary Club of York, in the Hotel Yorktowne; visiting the General Electric plant; and in the evening, speaker at the first annual meeting of the United Fund of York County, in the Y.M.C.A. Auditorium.

General Electric’s plant, in York, was located at 463 South Albermarle Street; just south of the Maryland & Pennsylvania Railroad tracks, in the eastern end of York City. At the time of Reagan’s visit, the site was GE’s national headquarters for the manufacture of welding equipment.

General Electric’s wire and cable production moved from that site in 1953 to Bridgeport, Connecticut. General Electric transformed the site by construction of two new buildings; joining the former structures to provide for continuous straight-line production lines. And repurposed a former high-bay factory building into a modern, two-story office building. The open house for the new welding equipment manufacturing plant was held October 21, 1954. The plant produced all types of electric arc welding equipment.

The history of a General Electric production facility in York goes back to 1921, when General Electric’s York Wire and Cable Works was organized; via the purchase of a local company that was producing insulated wire and cable products, which were fireproof. The plant originated as locally owned Heany Fireproof Wire Company in 1906.

During World War II, the men and women of the York Works of General Electric were granted an Army-Navy “E” Award, for production excellence. The local GE plant was the sixth of 19 York County factories granted the “E” Award. Quoting from the following notice, about the presentation on July 29, 1943: “The Army-Navy Production Award is bestowed upon the GE workers of York Works for skill and precision in producing limitless miles of specialized wire and cable; the very life-lines of power for ships, planes, tanks, guns and countless other implements of war for our fighting forces.”

Also during World War II, General Electric had a second plant in York, which manufactured rocket igniters. That 170 East Boundary Avenue plant produced igniters that initiated the firing of rocket-propelled four-pound armor-piercing grenades; in a weapon dubbed the bazooka. The story of that plant, which closed in 1949, is told in the YorksPast post at this link.