Roy Rogers in York and at Valley View Park 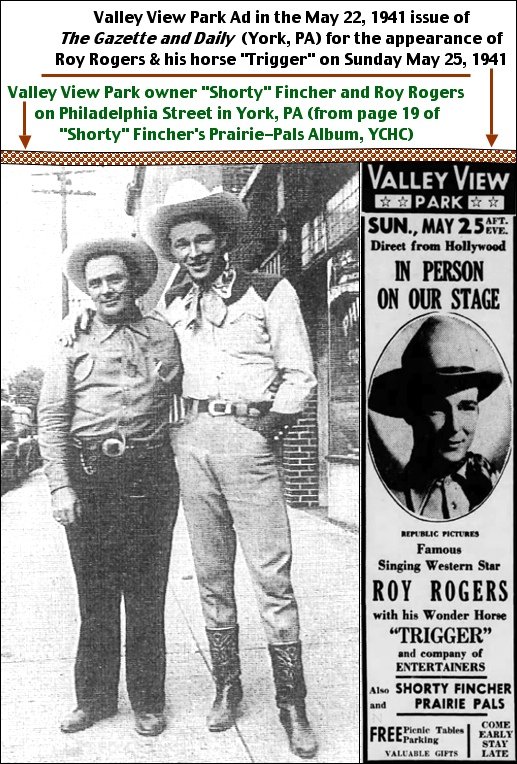 Roy Rogers with his Wonder Horse “Trigger”, plus his company of entertainers, performed during the afternoon and evening at Valley View Park in Hellam Township on Sunday May 25, 1941. During that visit, Valley View Park owner, Luther “Shorty” Fincher is shown with Roy Rogers on Philadelphia Street in downtown York. It is likely this photo was taken in the first block of West Philadelphia Street. Click on this LINK for a Full View of the illustration in this post if details are cut off in the cropping of illustration.

Valley View Park was located high on the hill along the Yorkana Road south of Hallam. The park commanded a grand view of the York Valley between Hallam and Wrightsville. “Shorty” Fincher rented the tiny park, at that location in 1940, the first year he came to York. He used it to put on Sunday shows, during the summer and into the fall, with his troupe of Western entertainers known as the “Praire Pals.”

Early in the spring of the second year, Fincher and his “Praire Pals” purchased the 7-acre park. They thinned out the trees, and removed: stumps, large stones, and bushes; creating a much larger venue. They also improved the facilities; from enlarging the stage to providing scores of picnic tables. In the 1980s this area, along western side of Yorkana Road, was developed. Jehovah’s Witnesses Kingdom Hall now is situated on part of the former Valley View Park, approximately in front of where the stage was located.

Roy Rogers was 29-years-old when he entertained at Valley View Park in 1941; his horse “Trigger” was 9-years-old. Rogers appeared in films since the age of 24. However for his first 13-films, he performed in supporting roles and appeared under his given name; Leonard Slye.

In 1938 the top singing cowboy in movies was Gene Autry. The movie studios through Autry’s monetary demands were getting out of control, so a competition for an additional featured singing cowboy was held; Leonard Slye was the winner. Republic Pictures studio heads selected Roy Rogers as the stage name for Slye. During his career, Roy Rogers appeared in over 100 films, was a recording artist, had a radio program for 9-years and had a television program for 6-years.

Roy Rogers married Dale Evans in 1947. Roy was back in York with Dale, when they performed at the York Fair on September 15, 1971. Roy thought so much of his horse, that upon the death of “Trigger,” in 1965, Roy had a taxidermist preserve the hide over a foam/plaster likeness of “Trigger” rearing up on his hind legs. In the same stance, the likeness of “Trigger” was scaled up to produce two 24-foot-tall fiberglass replicas; one served as the “sign” for the initial Roy Rogers Museum, while the other replica stands above the south scoreboard of the Denver Broncos stadium.

In 1968, Roy Rogers licensed his name to the Marriott Corporation, for their new chain of fast foods restaurants, to go along with other established Marriott restaurant chains; such as Hot Shoppes and Big Boy. The first Roy Rogers opened in April of 1968 near the Marriott headquarters outside of Washington, D.C. In the next six months, 38 Roy Rogers were opened around the country; with another 65 already under construction. By 1990, when the Roy Rogers chain was sold to Hardee’s, the Roy Rogers chain consisted of over 600 locations.

Directly across East College Avenue from the Engineering Buildings at Penn State, there was a Roy Rogers Restaurant in State College. For a quick meal between classes, my favorite was a Double R Bar Burger; think a Bury’s Hamburger meets a York Fair ham and cheese sandwich. Essentially it was an oversized cheeseburger with a special sauce that was topped off with a pile of thinly sliced ham; and of course you could also enhance it at the Fixin’s Bar.

In York, the Roy Rogers Restaurant that I frequented most often was located at 405 Memory Lane in Springettsbury Township; which is the corner where a Sheetz gas station now stands. The Roy Rogers at that location was built in the early 1980s. Hardee’s purchased the Roy Rogers chain in 1990 and converted many locations to a Hardee’s. Following the takeover, I continued going to the Roy Rogers on Memory Lane, until one day I stepped inside and saw they had changed over to Hardee’s menu items; I immediately left. That was the same reaction of many loyal Roy Rogers customers. About a month later word had spread that the Memory Lane location had converted back to Roy Rogers menu item and continued to operate as a Roy Rogers for a number of years until the site was purchased, about 1995, to build the Sheetz station.

Links to posts about other restaurants in the area: