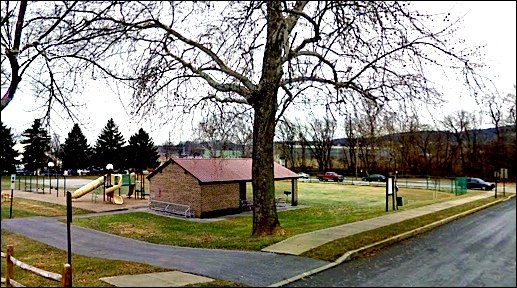 Rockburn Park is a Springettsbury Township park located within the East York neighborhood. The park is near the long ago site of Rockburn Station, which sat along the Pennsylvania Railroad; serving that neighborhood 100 years ago.

East York residents still have fond memories of an earlier park in their neighborhood, purchased and operated by the East York Playground Association. Established at the time of World War II, that 212-member volunteer group predates Springettsbury Township Parks and Recreation, which was created in 1958.

The Springettsbury Township Historic Preservation Committee is presently developing signage; illustrating and providing a short history associated with each of the twelve township parks. On several occasions I’ve stopped by the parks to ask adults, what they’d like to see on the signs. The East York Playground Association was mentioned fondly on visits to Rockburn Park.

I remembered seeing that association noted on the Schaszberger-Dempwolf Farm blueprint drawings, donated last year to the township by Beverly Dempwolf. From those drawings I’ve focused on that section; i.e. the 0.85-acre plot for a playground, acquired by the East York Playground Association on July 11, 1945.

The playground plot adjoins a piece of ground, previously provided from the Schaszberger Dempwolf Farm on September 14, 1937. The 1937 land was provided so sufficient land was available for construction of an addition to the Hiestand School; at back of the building.

The entrance to the playground was off East Philadelphia Street, via the neighboring schoolyard; in fact, locals often called it Hiestand Playground; even though it was owned and operated by the East York Playground Association. Hiestand School was within the Independent School District of Springettsbury Township when it opened in 1912 and within York Suburban School District when it closed in 1978. The former school building, at 2309 East Philadelphia Street, now houses apartments.

The playground of the East York Playground Association is adjacent to the original 1903 East York development. In the following illustration, the pertinent sections of the June 5, 1948 Plan of the Schaszberger-Dempwolf Farm and the September 2, 1903 Plan of East York are combined.

One woman, who was watching her grandchildren play on the playground equipment at Rockburn Park, told me that the fathers of many East York youngsters were serving in World War II and the citizens sought a means to create a neighborhood playground with organized programs. She said practically the whole neighborhood was involved in creating the East York Playground Association. She went on and on; and was definitely quite proud of that all volunteer group. She claimed their success resulted in the township starting a Parks and Recreation program in 1958.

I checked a few old newspaper articles. The East York Playground Association typically planned a 10-week supervised season from late June until Labor Day in September. There was always a big fourth-of-July event at the playground. From fundraising efforts, the association bought the playground and playground equipment, then hired male and female supervisors to plan and direct the activities with the assistance the volunteers. The association elected officers and had a nine member board.

The Charter of the East York Playground Association is recorded in York County Deed Book 30Y, Pages 405 to 416. The charter was granted January 8, 1945. From that document: “The purpose for which said corporation is formed is: The Providing of a non-political and non-sectarian organization for the development of a recreation program and for the acquisition, operation and management of recreational facilities for the community known as East York in Springettsbury Township, York County, Pennsylvania.”

Since 1972, Rockburn Park is the Springettsbury Township park for the East York neighborhood. The 1.58-acre park is located at the southwest corner of North Rockburn Street and Industrial Highway. The park includes a picnic shelter, grills, playground equipment and a basketball court. For safety, the open field, at the north end, is separated from the busy Industrial Highway by a fence. The following photo looks at the park from Rockburn Street.

The earliest 1903 plot plans of the East York development show Rockburn Street extending northward to the Pennsylvania Railroad tracks. Those tracks extended between York and Wrightsville. The 1957 aerial photo shows that section of Rockburn Street, still possibly dirt, existing towards the railroad tracks.

Oral history of the area has temporary storage buildings, along the Laurel Street dirt lane, being moved there from the original farms that the development replaced. Memories of the railroad station are that it was not much of a station; just a small partly covered platform.

I had been searching for a photo of Rockburn Station, when it was pointed out to me the circa 1930 aerial photo of East York by Karl Ort includes a recognizable image of the station. Zooming in on that section of Ort’s photo, I’ve annotated the features:

Based upon the height of the pictured Rockburn Station platform, it appears to be about 8-feet by 8-feet in size; i.e. it was just a covered waiting area for those wishing to board the train.

Scenario 1 . . . In planning the East York development, John H. Longstreet asked for a railroad station and the Pennsylvania Railroad offered him Rockburn Station; from which Longstreet named the road going to the station Rockburn Street.

Scenario 2 . . . In planning the East York development, John H. Longstreet placed street names on the plan, with the street extending all the way to the railroad tracks named Rockburn. After which Longstreet asked for a railroad station at that location.

Logical cases can be made for either scenario 1 or 2; many involving tying to resolve the question: why not name the railroad station East York? Perhaps we’ll never know which Rockburn naming came first.

The East York Playground Association historical background provides the more relevant history of organized recreation in East York, which can be used to develop the Rockburn Park signage.