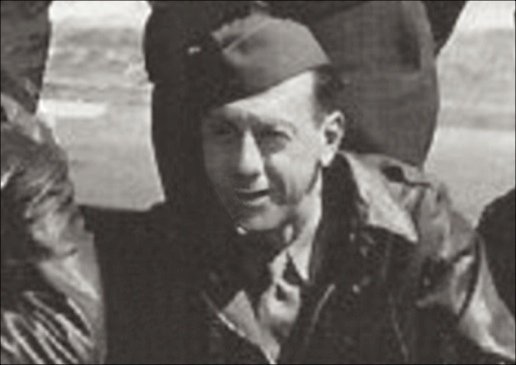 Rick recently uncovered the letter in his late father’s papers and in his search to learn more about it, discovered my post The B-17 crew of the “Karen B” and the Nazi SS murder of Robert Zercher. The “Karen B” was one of many Allied aircraft lost in a massive bombing mission of the Railroad Station in Berlin on April 29th, 1944. Two months after my post, international reader Marcel Raes, submitted the following photo of the headstone of Robert Zercher from within Ardennes American Cemetery, near Neuville, Belgium.

Willem van Vliet must have incorrectly believed Robert Zercher had been one that escaped during the raid and was therefore possibly back in the States a year later, so the October 9, 1945 letter from Willem to Robert Zercher, at 709 South George Street, ended up instead being read by Robert’s father Frank Zercher; since he lived at the same address. It is the delayed reply to Willem, from Frank, which is the noteworthy letter of May 29, 1946.

“My Dear Von Vliet;-
Your letter, dated October 9, 1945, addressed to my son Robert W. Zercher was received by me November 3, 1945, and if it helped in anyway would like to fill this page with apologies for not answering it before this date.”

“I am exceedingly sorry for this unusual delay, which in a sense was unavoidable due to the fact that I just could not bring myself to the point of replying immediately and shortly thereafter while writing to my Daughter in Norristown, Pa., located about 28 miles N.E. of Philadelphia, I enclosed your letter and requested that she return it soon as possible after reading it. For some unknown reason she failed to return it to me even upon numerous requests until today. I can only overlook her negligence for the reason that her husband enlisted in the army, was sent to California, and later secured a divorce and left his family of three children which made it necessary for my Daughter to go to work in order to support her family, the result of all this has caused her much anguish.”

“Now as to my son Robert;- Early in May 1945 I received a telegram from our Government stating that he was killed in action October 4, 1944 in Holland. August 3, 1945 received further information by letter stating the place in which he was hiding was raided by the German Gestapo and he was last seen being led away from his hiding place. Next morning his body was found on a street corner in Apeldoorn Holland along with the bodies of twenty civilians of the place, all had been shot.”

“How horrible it must have been POOR BOY.”

“How far is Apeldoorn from Gorssel and Amsterdam? You state in your letter, “In October tomorrow it is a year ago, the Germans came back with more than a hundred Dutch collaborator police men. In the early hours of the morning they encircled the house and attacked it, everyone was taken, the hole was found; they went straight for it so someone must have betrayed everything. No wonder perhaps there were too many who knew it. Only two boys escaped.” ”

“I suppose Robert was one among others caught in this raid. The whole thing is too horrible to think about. I often sit and think and wonder whether he had to suffer or whether his was a quick death.”

“My sympathy goes out to the Dutch people for all they have had to and are still suffering. I read that it is a characteristic of the Dutch to smile through their tears and the Bosche meanness has been met with determination and that they are coming back in great shape, and are gradually overcoming all obstacles.”

“I often wished I could visit Holland, for I learned from my Grandparents that some of our people originally came from Holland. My mother’s maiden name was Weaver, which is also my middle name; by the way is the name Weaver a Dutch name? The Zercher’s came from Switzerland near Zurich.”

“It is just six months since you addressed this wonderful letter to Robert and it did my heart good to read and reread it and will file it with other papers of Robert’s for future reference. It was also good to learn that he was among friends even in a foreign country.”

“By the way we have never heard where he is buried or if anyone knows, however will write the Government for information. I understand sometime in the future our Government will bring the bodies home for burial here, if requested by the families; all at Government expense. If I knew he was buried properly, in a suitable place, doubt if I would want his body brought home, of course it depends somewhat on his sisters attitude.”

“If there are any other Dutch friends or acquaintances of Robert’s, that you may know of, I would like to hear from them or if you can give me their names and addresses I would like to correspond with them.”

“Your letter states that you lived at Gorssel but will be living at Amsterdam only for a few months. I sincerely hope this letter reaches you, when it does please drop me a note at once giving me your new address, so that I can keep in touch with you. If perchance you have landed in the U.S.A., as you had planned, then please get in touch with me, perhaps I can arrange to meet you; which would be a real pleasure.”

“I am not very proficient writing on the typewriter but thought it better than writing by long hand, please excuse mistakes, etc.”

“Meanwhile I am, Sincerely yours, F. W. Zercher.”

Rick van Vliet noted his father often told stories about getting Allied airmen out of harms way after their bombers came down in Holland, on their way back to England. His dad was in his late teens and early twenties during this time. In uncovering the Zercher letter, Rick distinctly recalled, “this was one of the stories Dad didn’t talk about.” That was one of the reasons the submitted letter caused a sleuthing interest; to understand the Robert Zercher story.

After the war, Willem van Vliet immigrated to the United States on a Fulbright scholarship to Yale and married his wife, Grace, in 1953. He got a law degree and practiced in New York, Illinois, the Netherlands, and Minnesota. Rick recalled they lived in Holland during his junior high school years in the mid-1960s for about three years; after which the family primarily resided in Minnesota.

In the submitted letter, Frank Zercher writes about other papers of Robert’s. The letter, dated October 9, 1945, from Willem van Vliet, is likely among them. Who might have those papers today? The following nieces and nephews are some possibilities.

Robert’s older brother, Harold W. Zercher, was a Civil Service employee who was killed August 10, 1943, during an inspection flight at the Army Air Base in Homestead, Florida; he left a son Harold W. Zercher, Jr. Robert’s mother Ella died March 31, 1944 and his father Frank died February 19, 1956.

Robert’s other sister is his twin Pauline. Their birth certificates note that Robert and Pauline were born October 26, 1907, at their home, 303 North Penn Street in York, PA. Pauline was born at 10:30 P.M. and Robert was born at 10:50 P.M. At the time their father Frank Zercher was a manufacturer and merchant; his Regal Umbrella Company at 130 West Market Street were manufacturers of umbrellas and parasols, and dealers in trunks and leather goods.

Thus providing the names of 7 nieces and 2 nephews of Sgt. Robert W. Zercher who may have Robert’s papers, originally collected by Frank Zercher. Those papers could answer the question if Frank Zercher corresponded with any other members of the Dutch Resistance.

The question about the burial places of Robert W. Zercher could be partly answered via Ancestry.com indexing of U.S. Records for Military Cemeteries on Foreign Soil. Those records contain interment locations within temporary and permanent military cemeteries, however do not provide initial burial place, such as the grave site of Robert Zercher in a local cemetery near the town where he was killed; Apeldoorn, Holland.

Ardennes American Cemetery is the final resting place for 5,329 American military of World War II, with 65 percent of those being fallen airmen of the U.S. Army Air Forces and most of the remainder being American soldiers killed during Germany’s final major offensive in the west; the Battle of the Bulge, which took place from December 16, 1944, until January 25, 1945.

After the battle, a temporary cemetery was established February 8, 1945; in a large field southeast of Neuville, Belgium. Soldiers were reinterred to the temporary site from battlefield graves and later downed American airmen were reinterred to this site from graves scattered around Holland, Belgium, and Germany. The permanent Ardennes American Cemetery was dedicated in 1960 and the construction of the memorial and chapel was completed in 1962.