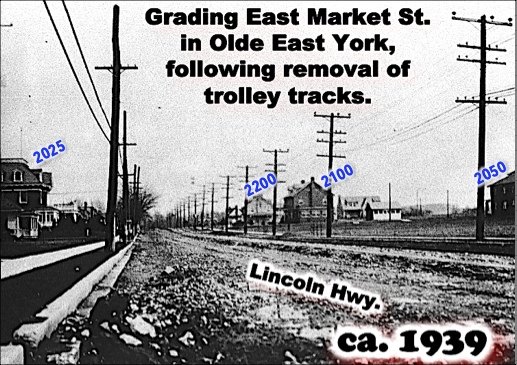 This is one of the slides in the October History Night presentation about stations, stops, and stories of “Rails through Springettsbury.” The circa 1939 roadwork photo provided several questions in the queue of one-on-one discussions later in the evening. This post provides expanded answers and additional illustrations to clarify those responses.

The YouTube video of the “Rails through Springettsbury” presentation at History Night on October 12, 2022, can be accessed through this link.

The ca. 1939 photo looks eastward along East Market Street from the vicinity of Findlay Street in the Olde East York neighborhood. The highway is being graded following the removal of trolley tracks. For orientation purposes, Market Street address numbers are noted for several of the buildings.

There were two inquiries if any photos exist of a trolley in East York during the time period when the tracks went down the middle of East Market Street, i.e. between the years 1932 and 1939.

I discovered the following, then undated, trolley photo in the Archives of Springettsbury Township Historic Preservation Committee. In that trolley photo, the utility poles at the left and right sides are consistent with earlier versions of those utility poles seen in the circa 1939 roadwork photo. And it appears the tracks are located between two motor vehicle lanes.

A gentleman made the comment about the scarcity of buildings on the south side of that section of East Market Street. With that thought in mind, he surmised the circa 1939 roadwork photo might be much earlier than 1939; i.e. maybe it is 1932, when the extra vehicle lane was added. That did not make sense to me, because in 1932, the trolley tracks would still be showing, when the south vehicle lane was added.

To further confirm the circa 1939 roadwork year, I utilized the following March 19th, 1938 Historic Aerial photo, showing that section of East York. The buildings seen in the ca. 1938 roadwork photo are consistent with those within a viewpoint from Findlay Street. Also a darker line down the middle of East Market Street, is likely the trolley tracks; since lubricant and air cooled DC motor dust does tend to slightly darken the pavement where trolleys operated.

Bringing the investigation to the present, the following 2012 eastward view is along East Market Street, from the Findlay Street intersection, in the Olde East York neighborhood. For comparison with other illustrations, corresponding Market Street address numbers are noted for the buildings not shielded by trees.

Here are the links to previous Springettsbury Township History Nights:

The YouTube video of the “Early Businesses in Springettsbury” presentation at History Night on July 13, 2022, can be accessed through this link.

The YouTube video of the “Early Schooling in Springettsbury” presentation at History Night on April 13, 2022, can be accessed through this link.

The YouTube video of the “Codorus Navigation Works” presentation at History Night on October 13, 2021, can be accessed through this link.

The YouTube video of the “Aviation in Springettsbury” presentation at History Night on July 14, 2021, can be accessed through this link.

Links to related trolley posts include: