Earlier this month I was driving around York County to seek out Then & Now views to match some old postcards.  As is often the case, I ended up finding something unexpected.  This post preempts my exploration for the Lincoln View Motel & Restaurant along the Lincoln Highway; which will be posted on Monday.

I always assumed the western marker was closer to Abbottstown, maybe somewhere near the creek that serves as the boundary between York and Adams Counties.  The marker is actually about one-half mile east of Abbottstown on the south side of the Lincoln Highway.

June Lloyd wrote an extensive post describing the fundraising effort to plant the 1,500 memorial trees along the Lincoln Highway in York County prior to the 1922 dedication.  Even though the trees were planted with eventual road widening in mind; the planners did not foresee the ultimate width of the Lincoln Highway, which took most of the trees.  Few of these memorial trees remain.

Continue reading for more about the ROAD OF REMEMBRANCE.

This photo of the May 30th, 1922 dedication ceremony in Wrightsville appeared on the front page of the June 1st, 1922 issue of the York Gazette.  The same photo later appeared in the July 1922 issue of American Forestry with caption identifying several of the people involved in the dedication. 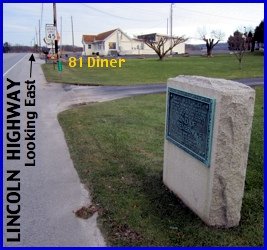 It was under the supervision of The Woman’s Club of York that funds were raised to have the memorial trees planted.  Mr. Pack read a letter from The White House, where First Lady Florence Kling Harding congratulated The Women’s Club of York on their wonderful work on the Road of Remembrance.  Hon. A. B. Farquhar, who heard President Abraham Lincoln deliver the Gettysburg Address in 1863, recited that speech at the dedications.

The two-page article in the July 1922 issue of American Forestry noted; “York County is one of the pioneers in memorial tree planting on such a scale.”  This photo shows the location of the ROAD OF REMEMBRANCE Memorial in Paradise Township; it is on the south side of the Lincoln Highway, just west of the 81 Diner.  I’ve also pinpointed the location on the following Bing.com aerial photo/map.