This photo of the River Hill One-Room Schoolhouse in East Manchester Township was taken in 1941 by Scott W. Knaub; a Superintendent of York County Schools. This schoolhouse is located near Mt. Wolf at the intersection of Wago Road and Board Road. The school lane down to Wago Road can be seen passing on the right side of the schoolhouse and Board Road passes on the left side of the schoolhouse; half-way up the hillside.   This schoolhouse in East Manchester Township is not to be confused with another River Hill One-Room Schoolhouse that existed in Lower Chanceford Township for a short time during the late 1800s.

Elaine Bittner wrote, “Looking for graduates of a one room school named River Hill. Children not living in the town limits of Mount Wolf were required to go there. I believe building still exists but is converted to a house.” Elaine’s query about River Hill complemented some earlier research I had done on River Hill One-Room Schoolhouse. 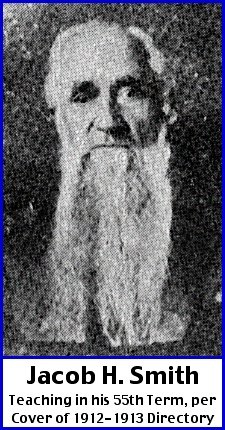 The Jacob H. Smith cover of 1912-1913 piqued my curiosity because that is the same name of my Great-Grandfather; even down to the same middle initial. Unfortunately my ancestor died in 1898 in East Prospect, however that did not stop me from doing a little research on the Jacob H. Smith that lived in Manchester.

These school directories do not list the names of the individual schoolhouses until about 1916, therefore the 1912-1913 directory did not provided an answer to my question, “At what schoolhouse did Jacob H. Smith teach during 1912-1913?” It was newspapers to the rescue. The following item in the July 10, 1912, issue of The York Daily, provided the answer: Jacob Smith taught at River Hill School.

Continue reading as I list a few of the students attending River Hill and explore the history of the school further.

The December 30, 1941, issue of The Gazette and Daily reported, “Pupils of River Hill School, near Manchester, Miss Dorothy E. Gross, teacher,” presented a Christmas Program. Students from that year would be in there 80s today. The names of the following 24 students were included in the 1941 Christmas Program:

In 1860, the Northern Central Railway had been operational for about ten years in this part of York County. Railroad stations are typically located at points on a railroad where a summit is reached. The high point of the Northern Central in northern York County occurred in the area where Mount Wolf sits today, supposedly resulting in the “Mount” in Mt. Wolf.

On the 1860 map, business locations of Adam Wolf & Sons appear at three places along the railroad near Mt. Wolf Station. Adam Wolf & Sons businesses encompass lumber, hardware, building materials and warehousing. One of Adam’s sons is George H. Wolf; his residence is noted on the 1860 map as “G. H. Wolf.”

George H. Wolf was an early stationmaster at this stop on the Northern Central Railway; initially known as Campbell Station. In 1852, George H. Wolf became the first postmaster for the township residents in the vicinity of the railroad station; he is likely the person that named the post office Mount Wolf. Soon, the Northern Central Railway changed the station name to Mt. Wolf Station. The railroad station is actually near the G. H. Wolf residence; the 1860 mapmaker apparently notes this whole area is known as Mt. Wolf Station by his placement of that name on the map.

The settlement of Mt. Wolf quickly grew around the railroad station; about 1867 it became a village and on August 23, 1910, it was incorporated as Mount Wolf Borough. Today’s Governor Tom Wolf grew up and still resides in Mt. Wolf; he is the Great-Great-Grandson of Mt. Wolf Stationmaster & Postmaster George H. Wolf.

The, at least 155-year-old, brick River Hill One-Room Schoolhouse still stands as a private residence at 5835 Board Road. The following 2015 photo shows the north side of the former schoolhouse, facing Board Road.

The Board Road, at this location, carries the Mason-Dixon Trail as it makes its way to the Susquehanna River. The Mason-Dixon Trail having stated at the Whisky Spring stop on the Appalachian Trail in Cumberland County; whereupon working its way eastward, across northern York County. The pictured extra wide brim of the roadway is for the Mason-Dixon Trail; it continues along the Board Road down to Wago Road and then makes a right turn onto Gut Road. From there on, this popular hiking trail remains relatively near the York County shore of the Susquehanna River and continues so into Harford County, Maryland.