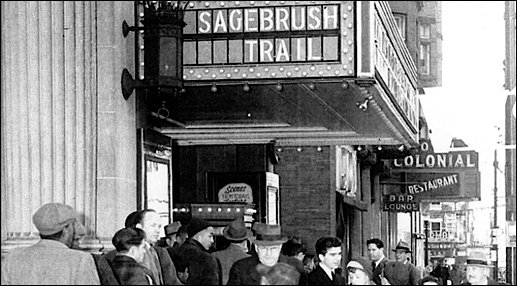 Crowd in front of Ritz Theatre, at 28 South George Street in York, PA; view is looking past the Colonial Hotel, towards the Square. November 30, 1947 photo; the first day the blue-law ban on showing Sunday movies in York was lifted. (Photo from Collection of York County History Center)
Posted by Stephen H. SmithJanuary 8, 2019May 16, 2021 All Posts, Buildings, Businesses, Pennsylvania, Roads, Various Locations, York County

The crew filming the ‘York Plan’ movie during 1942 utilized the Ritz Theatre as their testing laboratory for daily film screenings. The Ritz was one of the oldest movie houses in York, originally established in 1910 as the Scenic Theatre; then featuring a vaudeville act and showing several silent films for five-cents.

In 1925, Nathan Appell purchased the Scenic Theatre and was responsible for renaming it the Ritz Theatre. Silent films gave way to talking pictures in the 525-seat movie house. In 1938, Warner Brothers took over operation of the Ritz; at which time they extensively redecorated, while installing new seating, sound and projection equipment. On August 21, 1938, Warner Brothers opened the ‘New’ Ritz by showing Walt Disney’s Technicolor film ‘Snow White and the Seven Dwarfs;’ matinees were 15-cents, evenings 20-cents, and children always 10-cents.

Details about the crew filming the ‘York Plan’ movie utilizing the Ritz Theatre, come from a page 5 article in the October 3, 1942, issue of The Gazette and Daily. Quoting the whole article:

“Through the courtesy of Warner Brothers and Manager Jone Kane, of the Ritz Theatre, that movie house was used as a testing laboratory by the U. S. Signal Corps group which spent the past three months in York taking moving pictures of defense plants, historical places and other subjects. The theatre was used for both sound and projection after the closing hours at night. The Signal Corps unit, in addition to eight civilian employees under Lieut. Thomas Curtis, former Hollywood director, consisted of Director Flaherty, Sergeants Davis and Falcone, sound technicians, William Rescher, cameraman, Maion Broda, producer and James MaGuire, assistant.”

“The unit has returned to the Paramount studios in New York and soon expects to receive an assignment to Alabama shortly. The members of the I.A.T.S.E. of York, cooperated with the Signal Corps to the fullest extent in projecting sound and in shots. The picture made by the Signal Corps will be released in the near future.”

The I.A.T.S.E. is the International Alliance of Theatrical Stage Employees; a labor union, founded in 1893, representing technicians, artisans and craftspersons in the entertainment industry, including live theatre, motion picture and television production, and trade shows.

The following is a full view of the November 30, 1947, photo showing a crowd in front of the Ritz Theatre; while looking past the Colonial Hotel, towards the Square. The photo is from the Collection of the York County History Center, with it originally published in the December 1, 1947 issue of The Gazette and Daily. The marquee notes the movie playing is ‘Sagebrush Trail;’ a film starting John Wayne. In its later years, the Ritz was known for predominately rerunning westerns.

The Ritz ceased being used as a movie house in June of 1955. Chronologically, some of the actors appearing in films during the final week of movies shown at the Ritz were determined via newspaper ads during the week beginning Monday June 13th: Spencer Tracy, Richard Widmark, Cameron Mitchell, Humphrey Bogart, Lauren Bacall, Gary Cooper, Ingrid Bergman, and Burt Lancaster.

The Drovers and Mechanics National Bank purchased the vacant Ritz Theatre in 1957 in order to expand the footprint of their bank. Demolition on the 28 South George Street theatre was started in December 1957; building materials and the seats were offered for sale. During 1958, the bank demolished their building at 30 South George Street.

Newspaper ads welcomed Yorker’s to the grand opening of the new ‘Jet Age’ Drovers and Mechanics National Bank building, at 30 South George Street, on January 17, 1959. The modern design featured a 60-feet wide by 30-feet high front façade, almost totally constructed of plate glass held in place by stainless steel supports; it stretched the whole way to West Mason Avenue, with the greater part of the northern half occupying the former Ritz Theatre site.

Inside the glass-fronted bank, a huge mural faced South George Street; hanging above the banking floor. York artist Herb Leopold painted the mural, showing the wide variety of professions that utilized Drovers bank. When the five-story office building at 96 South George Street was built in the late 1980s, the façade of the bank was changed to compliment that neighboring office building..