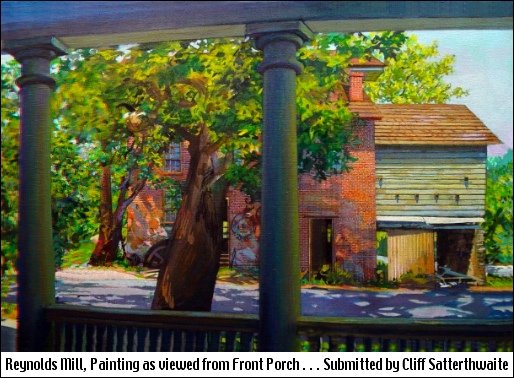 Cliff Satterthwaite painted this view of Reynolds Mill from the front porch of the house just across Reynolds Mill Road. The house still stands, the mill was torn down in 1977. I’ve annotated the following northward looking Bing.com Birds Eye View to illustrate where Reynolds Water Powered Grist Mill was located.

Reynolds Mill was located in Springfield Township. It utilized water from the South Branch of the Codorus Creek to power its water wheel. Cliff Satterthwaite produced paintings of Reynolds Mill from the viewpoints I’ve so noted on the aerial view.

A southwest looking view “A” gazes across Twin Arch Road showing a wood frame addition on a stone foundation, attached to the main brick mill building. Jim McClure included a painting from this viewpoint in this York Town Square post.

Cliff’s painting, at the beginning of this post, is a westward looking view “B” that gazes at the front of the mill building from the front porch of the still standing house on Reynolds Mill Road. A painting from northeast looking viewpoint “C,” gazing at the headrace and wheel corner of Reynolds Mill is included later in this post.

One might be surprised to learn that no person named Reynold or Reynolds ever owned or operated the mill. However there were several owners named Rennoll; their obituaries indicate they owned Rennoll’s Mill. 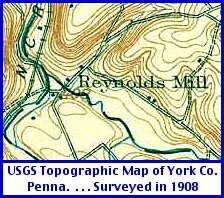 This United States Geodetic Survey (USGS) Topographic Map, surveyed in 1908, is the first instance the name Reynolds Mill is utilized on a map. Location names on the earliest topographic maps are derived from USGS field notes that have been verified by a local official.

The USGS surveyor likely asked what is the name of this mill; he was told Rennoll’s Mill, but wrote down Reynold’s Mill. Somehow this incorrect spelling got past the local official. It has been on USGS Maps and local maps as Reynolds Mill ever since and even appears on present ADC Map Books; see page 3675, grid B7.

The first Rennoll to own the mill was George W. Rennoll, who purchased the mill in 1880. George W. Rennoll left his whole estate to his two children Charles L. Rennoll and Anna E. Loucks; whereupon Charles bought out Anna’s share. The March 12, 1964 Gazette & Daily obituary of Charles L. Rennoll notes, “Mr. Rennoll owned and operated RENNOLL’S MILLS from 1901 to 1933.” Charles’ sons George S. Rennoll and Charles R. Rennoll were the next operators of the mill; they sold the mill to Robert A. Kinsley in 1976, so the mill had 96-years under Rennoll ownership.

George W. Rennoll was a pioneer in introducing the modern method of flour rollers at Rennoll’s Mill. John Gibson’s 1886 History of York County, on page 186 of the Biographical Sketches, notes:

His present mill, which he purchased in 1880, and after operating successfully for three and a half years he introduced in his mill the celebrated roller process mode of making flour, and it many be proper to mention here, as an evidence of Mr. Rennoll’s push and energy in the prosecution of his business, that he was the second man in York County to adopt this popular method of manufacturing flour.

By 1900, the overshot water wheel was replaced by water-powered turbines. One S. Morgan Smith turbine ran the four Wolf Rollers, and one Baugher (Reachard) Turbine ran the stones and saw mill. The mill ran 24/7, producing 336 barrels of flour per week. The flour from this mill was marketed as “White Pearl Flour.”

The mill was last run by waterpower in 1934 and had ceased operation by 1941. During Hurricane Agnes in June of 1972, the floodwaters reached the first floor ceilings of the house and the mill. The damaged 161-year-old mill was torn down in 1977.

This Cliff Satterthwaite painting of Reynolds (Rennoll’s) Mill is from a northeast looking viewpoint “C.” Cliff is standing next to the headrace; looking at the wheel corner of the mill. The water in the tailrace went under the mill, exiting at the back of the mill; passing under Twin Arch Road before flowing back into the South Branch of the Codorus Creek. 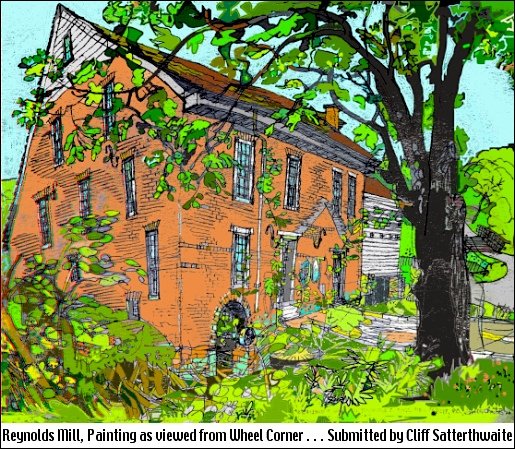