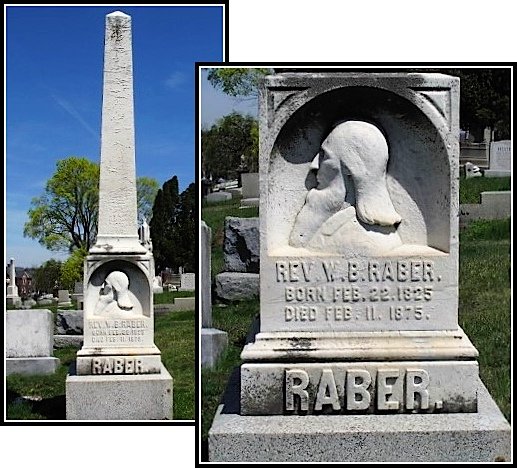 Rev. William B. Raber wrote in 1857 it was Maria Conn who suggested Pleasureville as a more pleasant village name, as opposed to the Possumtown name bestowed by outsiders. I continue to search for Ann Harris, who had access to those Raber letters twenty years ago; while Sandy Paules is using some of her contacts in a parallel attempt to gain access to the full content of those letters.

Sandy told me to check out Rev. Raber’s impressive monument, at Prospect Hill Cemetery, which his congregation erected following his untimely death. He was three years into a stand as the pastor at The First Church of the United Brethren, located on the corner of Philadelphia and Newberry Streets in York, when he died unexpectedly; just shy of his 50th birthday in 1875.

The photos of Rev. Raber’s monument, showing his profile, come from Find-a-Grave. The full 1800s history of the church in Pleasureville, from the “Landmark History of the United Brethren Church,” is included later in this post.

Click on this LINK for a yorkblog.com Full View of the original photos in this post if details are cut off in the cropping of the photos, or if they have been removed from the ydr.com site.

The entire title of the book is “Landmark History of the United Brethren Church; Treating of the early history of the Church in Cumberland, Lancaster, York and Lebanon Counties, Pennsylvania, and giving the history of the denomination in the original territory.” The authors are: Rev. Daniel Eberly, A.M., D.D., Rev. Isaiah H. Albright, A.M., Ph.D., and Rev. C. I. B. Brane, A.M., D.D. The book was published during 1911, by Behney & Bright, Reading, Pa. The section on York County churches was authored by Rev. Albright. Quoting the complete history of “SPRINGET CHURCH” from pages 176 and 177.

“Springet, known for years as ‘Possumtown,’ later as Pleasureville, and now as Springet, is located two and a half miles northeast of York. Anthony Seiple lived at this place seventy years ago [1841], where there were only a few houses, and the surrounding country was covered with dense forest. His only occupation was ‘[rac]coon and [o]possum hunting,’ and he was called ‘the king of possums.’ The first name the town bore was not desirable, hence it was changed to its later name and then to that it now bears.”

“Our ministers commenced to preach in this village in the home of Dr. George Conn, who was a relative of ‘uncle’ George Conn, of York, in 1855. The doctor was converted to God during the winter of 1854-55 at a great meeting held in the Liverpool (Manchester) union church under the pastoral labors of Rev. W. B. Raber. At a quarterly conference held at a camp-meeting near Manchester August 16, 1860, the following brethren were elected as trustees to build a church in Springet: Charles Diehl, of Manchester, George Conn and Lawrence Mahr.”

“These trustees bought eighty-six perches [a little over one-half acre, located where the present United Methodist Church now sits at 2606 North Sherman Street] of ground from William Nissley in the heart of the village for $60. The date of the deed is January 19, 1861. Within a few months after the purchase of the lot, a neat frame church, 30 x 35 feet in size, was built at a cost of about $500, without counting considerable free labor that was done toward its erection. At this time Rev. J. B. Jones was the pastor, and the only members of our church in the village were Dr. George Conn, John Gipe and Lawrence Mahr.”

“Rev. J. C. Smith laid the corner-stone of the church on a cold day in the spring of 1861. He preached upon the walls of the new building, having been refused admission into the school-house because the directors were not much in sympathy with the ‘prayer-meeting people.’ Rev. F. Hagen, a Moravian preacher of York, was also locked out of the school-house because he was going to have a prayer-meeting there, when Dr. George Conn left him hold the meeting in his house. We have never learned that prayer or a prayer-meeting ever did any harm to any person or property. The completed church was dedicated to God on Sunday, June 2, 1861, by Rev. S. Enterline, who was then pastor of our First Church in York, assisted by Revs. W. B. Raber and Fred. Grimm. It was named ‘Sardis Church’ [after the church mentioned in Revelations 3: 1-6].”

“Some glorious revivals were held in this small church. But the growing congregation and Sunday School demanded a larger and better church. The old building was torn down in 1880, and the present [in 1911] frame church, 30 x 60 feet in size, was built on the site of the old one at a cost of $1,400, under the pastorate of Rev. A. H. Rice. It is a plain and attractive building, has a nice steeple in which swings a bell of excellent tone. It was dedicated on Sunday, November 7, 1880, by Rev. D. D. DeLong, D.D., President of Lebanon Valley College, assisted by Revs. C. T. Stearn, D.D., presiding elder, J. C. Smith, J. P. Miller, J. R. Hutchison and A. H. Rice, pastor in charge.”

“The following are the names of some of the early and influential members of this church: the Conns, Billets, Shepps, Kellers, Plowmans, Shrulls, Shenbergers, Bowers, Innersts, and Ferreys, most of whom have gone to their rest. Their children and grandchildren continue to carry on the work they so heroically commenced.”

A future post will attempt to pinpoint the ca. 1840 property belonging to Anthony Seiple; “the king of possums.” As a first observation from early property deeds, it appears Anthony Seiple and the other opossum hunters (evidently named in the 1857 letters; i.e. Daniel Billet, John Meyers, and Jacob Kauffman) were located in the northern part of the village.

Links to related Pleasureville posts include: