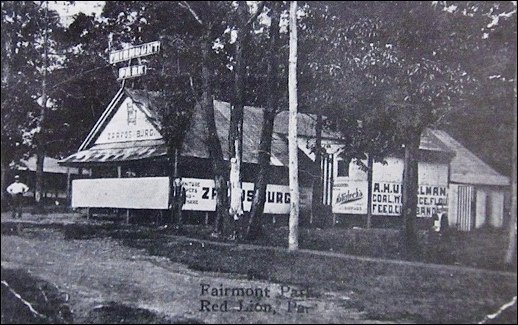 The fair included the staples: food, games, rides and entertainment. Exhibition buildings, such as the one pictured, held commercial exhibits; while automobiles were exhibited in large canvas tents. In 1924, 55% of the exhibitors were from York, 40% were from Red Lion and the remaining exhibitors were from Dallastown and Yoe.

Click on this LINK for a yorkblog.com Full View of the two photos in this post if details are cut off in the cropping of the photos, or any has been removed from the ydr.com site.

The Full Story of the Red Lion Fair

The first Red Lion Fair was held September 2nd through 5th in Fairmount Park during 1914. The August 13, 1914, issue of The York Daily reported:

The following year, The York Daily, in its issue of September 6, 1915, reported 24,500 attended during the four-day run of the second annual Red Lion Fair. These initial agricultural fairs in Red Lion were discontinued after several of the Fairmount Park buildings were destroyed by fire following the 1916 fair.

Nevertheless the Red Lion Fair continued under a new format; focusing more on commercial exhibitors, rather than agriculture. The new fair was officially called the Red Lion Gala Week Fair. It was such a fair that the July 29, 1924, issue of the Harrisburg Telegraph reported on fair preparations, while listing exhibitors:

“Red Lion, July 29.—Preparations are being made for the Red Lion Gala Week Fair at Fairmount Park, August 16 to 23. The exhibition buildings are being put in shape for the commercial exhibits, and the automobiles will be exhibited in large canvas tents.”

“The fair this year will be held both day and night. Up to the present time space has been reserved for thirty-five commercial exhibits and about twenty-automobile exhibits. A list of the exhibitors who have reserved space are:”

An article in the January 28, 1938, issue of The Gazette and Daily reports that R. M. Spangler, manager of the Red Lion Gala Week Fair announced that the 20th annual Gala Week Fair will be held the week of August 22 to 27, inclusive; which is Monday through Saturday. The fair has outgrown Fairmount Park and is being held in a field along the Felton Road, southeast of the borough. In the article Mr. Spangler made several announcements:

“He announced that the Acme Shows Incorporated have been engaged for the week. The show company has given Mr. Spangler a guarantee of eight rides, 12 shows and 35 concessions, in addition to other shows and concessions to be secured by Mr. Spangler. For the nightly free act, Mr. Spangler has secured the services of “The Great Delonra,” an aerialist. He has also been endeavoring to secure “Polly Jenkins and Her Plow Boys,” for an added free attraction.”

Here is the full photo postcard that I purchased on eBay. Something about that building reminds me of the big Barshinger Reunion held annually at Fairmount Park. Our family attended these during the 1950s; up until the time the big reunion split into several smaller Barshinger Reunions held at other venues.

Links to related Fair posts include: