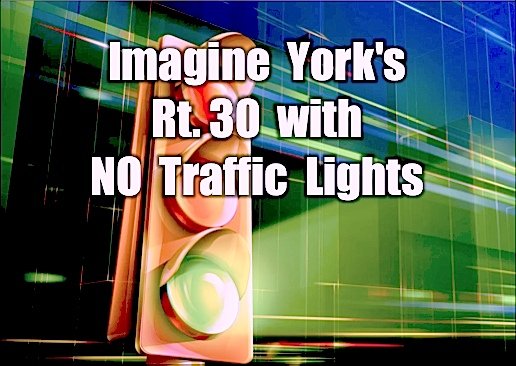 Don May recalled a State proposed plan to construct a real East-West Bypass of York; i.e. four-lanes, limited access, with NO traffic lights. Don often heard details about the plan from his father, because the North Sherman Street interchange, on the proposed bypass, would have taken the house; which his father built.

Don recalled his father often remarking, “Our house was saved because prominent locals wanted a bypass lined with businesses and signal lights. Nixing the State’s plan of a through bypass, extending into the ridges between the York and Druck valleys. In turning down an actual east-west bypass, influential locals strongly believed: We don’t want tourists merely speeding between Lancaster and Gettysburg on our bypass. We must slow them down, so they spend some time and dollars in York.” I hope that philosophy has produced a nice pile of tourist dollars, to make up for the aggravation to present locals; burdened with traveling that stretch of Route 30 around York.

Don inquired if I ever saw drawings of the bypass he described. For a while it was part of the May’s dinner table conversations; beginning about the same year I-83 opened. Using that tip and Newspapers.com, I discovered a 1959 State Highway proposal to relocate U.S. Route 30, as an East-West Bypass of York. The map for this plan matched the bypass going through the May house on North Sherman Street and agrees with his comment about the bypass extending into the ridges between the York and Druck valleys..

The 1959 plan had the Wrightsville and Hellam interchanges about where they ended up with the present Route 30. However in the 1959 State proposal, heading west, after Hellam, the bypass started gradually ramping up the hillside, eventually headed west though present day Rocky Ridge Park. The following schematic shows the location where Mount Zion Road bridges the 1959 plan to relocate U.S. Route 30, as a real East-West Bypass of York.

Don May recalls discussions about: should Mount Zion Road or Sherman Street become the site of the eastern York interchange? Ultimately the Naval Ordnance Plant had a major say in having the interchange located on Sherman Street. After all it would be a short trip out the back of their plant along Paradise Road to that interchange, and part of the bypass would take the extreme northern part of the NOP property.

Don remembered his father, at one time, having a hand drawn sketch of the Sherman Street interchange. I crafted his recollections of that sketch into the following schematic of a clover-leaf interchange at North Sherman Street, on the 1959 plan to relocate U.S. Route 30, as a real East-West Bypass of York.

The western York interchange on the East-West bypass was at Roosevelt Avenue. From that point, westward, the location of the present four-lane Route 30, closely follows the 1959 proposal. The following schematic is my guess at the general layout of the clover-leaf interchange at Roosevelt Avenue, on the 1959 plan to relocate U.S. Route 30, as a real East-West Bypass of York.