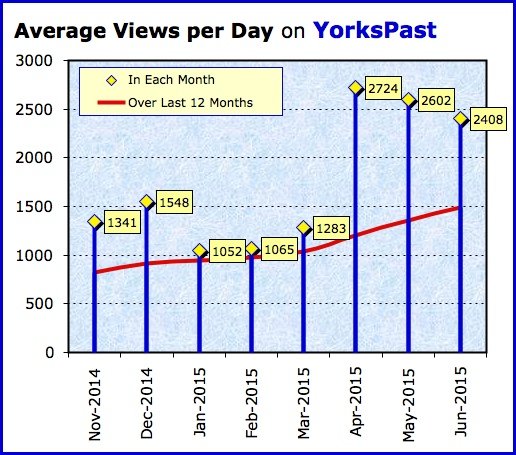 For the third month in a row YorksPast readership continued at a high level. Thanks to all my loyal readers. It was nice to meet several of my readers while touring the French frigate Hermione when it was docked in Annapolis; enjoyed your feedback. At the beginning of every month, I’m sharing with my readers the top 10 posts from the previous month. These are your favorites during June 2015:

In 1780, the Hermione was assigned to transport the Marquis de Lafayette upon his second voyage to America. It was imperative that Lafayette arrived safe; therefore the captain was instructed to avoid military action. A meticulously detailed replica of the Hermione was completed in France last year and earlier in June, the maiden transatlantic voyage was completed; arriving at Yorktown, Virginia, on June 5th. Among the other east coast cities the Hermione visited during June were Annapolis, Baltimore and Philadelphia.

S. Morgan Smith owned a Grist Mill, located in the extreme southwestern corner of Dover Township, where Big Mount Road crosses the Conewago Creek. This Grist Mill went by several names, including Ort’s and Diehl; however Bigmount is the name most often used.

Readers Choose Top 10 Posts during May 2015; YorksPast Readership Continues at a High Level

YorksPast readership continued at a high level during May 2015. At the beginning of every month, I share with my readers the top 10 posts from the previous month. This post provides links to those favorites during May.

In front of the stone house at 157 West Market Street in York, Pennsylvania, stands a life size statue of General Marquis de Lafayette. The statue was sculpted by Lorann Jacobs and placed in the sidewalk at this location in 2007. The statue of Lafayette is located at this spot due to a significant toast he gave on the second floor of this house during 1778. In all likelihood, that toast played a role in thwarted a scheme to oust George Washington as Commander-in-Chief of the Continental Army.

Many in York remember the long-standing truss bridge spanning the Codorus Creek on North George Street. The 1968 artwork of Cliff Satterthwaite depicts a northward looking view of that bridge with the former Western Maryland Railroad track crossing in the foreground. This majestic truss bridge stood into the 21st Century, although just barely. This bridge was replaced with a four-lane concrete bridge; that opened July 16, 2001.

Bloomingdale, a remarkable home located at 3405 East Market Street, is one of the historic properties threatened for yet another shopping center in Springettsbury Township. Historic York, Inc., prepared a Pennsylvania Historical Resource evaluation for this property in 1989. They concluded the home was built in 1887 per tax records; however a comparison of proportions and attributes against earlier 1800s properties, suggest it may be older.

Cliff Satterthwaite created artwork of Avalong Dairy in 1964. It is a southwest looking view from the vicinity of the miniature golf course next to the Avalong Dairy Bar & Drive-In. At the extreme left, is the small creek bridge over Whiteford Road. At the extreme right, behind the trees, the chimneys of the Avalong Mansion can be seen; this mansion now houses Christmas Tree Hill. The two big dairy barns, that once stood, directly east of the mansion are partly obscured by the massive sycamore tree and farmhouse; which are prominently located at the center of Cliff’s artwork. This sycamore tree and former farmhouse still stand at 2901 Whiteford Road.

How Black Bridge got its Name

Old timers on the railroad recalled how a long-ago railroad bridge maintenance crew misunderstood their painting instructions for that bridge. Instead of only painting the iron tie rods and all other iron hardware, that crew painted everything black; timbers included. The bridge maintenance crew took a lot of ribbing about their Black Bridge; which became its nickname, until eventually becoming its official name.

Saga of the Watch that Washington presented to Lafayette

Following the Battle of Yorktown, Virginia, George Washington presented a watch to Lafayette. It was inscribed, “G. Washington to Gilbert Mottiers de Lafayette; Lord Cornwallis Capitulation (Yorktown) Oct’ 17th 1781.” Upon Lafayette’s visit to the United States during 1824/1825, the watch was stolen; learn about the outcome in this post.