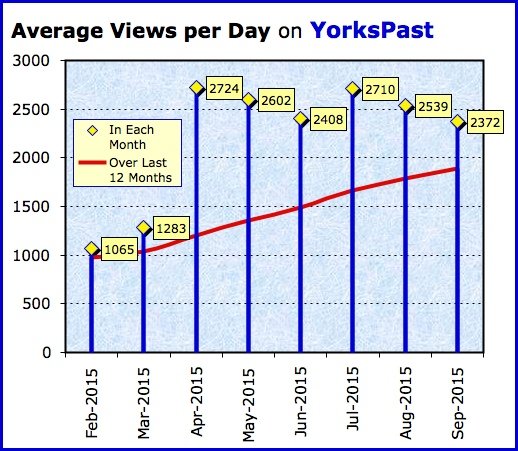 Near the beginning of every month, I’m sharing with my readers the top 10 posts from the previous month. These are your favorites during September 2015:

Several readers reminded me the Mighty Atom would take a 60-penny nail and bend it with his bare hands to craft a precisely sized finger ring as a memento for the recipient. It appears many of these bent nails finger rings have been retained as mementos of seeing the Mighty Atom during his performances at the York Fair.

Terry Downs shared some neat photos of a Drive-In Easter Sunrise Service that St. John’s Lutheran Church held at Stony Brook Drive-In Theatre in 1957. My favorite photo is a classic view of drive-in speakers hanging on the car windows, with the Rev. Enno A. Schmoock delivering the sermon, backed by St. John’s Senior Choir and the cross.

“Lost Landmark?” is the headline of an article appearing in the April 30, 1992, issue of This Week; a weekly newspaper serving Springettsbury and Spring Garden Townships. The subheading is “Owners of Meadowbrook Restaurant get permit to tear down historic Springettsbury farmhouse.” On April 28th, Meadowbrook Limited Partnership had paid the $5 demolition permit fee; giving them the right tear down the building with little notice. This post provides the rest of the story.

Crossroads of the Susquehanna Valley

Welcome to the Heart of the Lower Susquehanna

The artwork of Cliff Satterthwaite captured The Mighty Atom during one of his free shows during the 1968 York Fair. By 1968, The Mighty Atom was setting up his trailer besides the poultry building. Cliff nailed the scene perfectly, with all the photos of The Mighty Atom performing various feats of strength hanging in the background.

The Grand Army of the Republic (G.A.R.) became the first nationwide veterans organization in the United States following the Civil War. They were a powerful political force; being responsible for officially getting May 30th established as Memorial Day and in lobbying Congress to establish regular veterans’ pensions. Read about the 13 G.A.R. posts in York County.

‘This Week’ was a free weekly newspaper distributed to more than 14,000 homes and businesses in Springettsbury and Spring Garden Townships. It was founded in 1989 and was published until the late 1990s. Their slogan was: “Written to enhance the quality of life for those who live, work and play in our communities.”

Artwork by Cliff Satterthwaite completes the Freysville trilogy, along with his 1972 photo and my 2015 photo of this crossroads. There is a dramatic difference in the appearance of the Freysville intersection in these ‘Then versus Now’ comparisons.