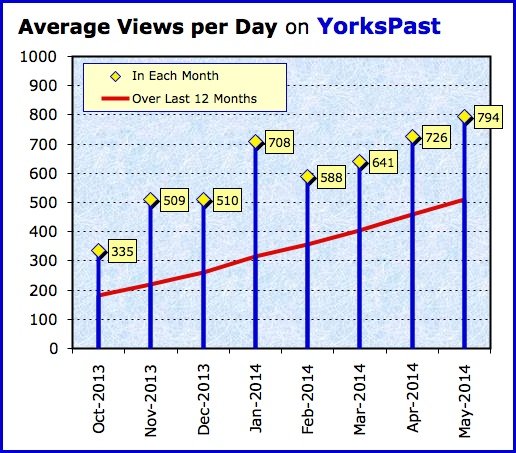 At the beginning of every month, I’m sharing with my readers the top 10 posts from the previous month.  I’ve noticed you’re also catching up on reading the past installments of my historical novel, that I post every Thursday; 27 of the top 50 post views were installments of Railcar Gold.  These are your favorites during May 2014:

NYC Exhibition of over 120 Artistic Works by Jeff Koons

This post provides a link to an upcoming exhibition of over 120 artistic works by York County native Jeff Koons.

1830 Then & Now for a Stately House in Springettsbury Township

This is the closest “Now” photo of a house at 3103 East Market Street in Springettsbury Township, matching a 1830 painting by William Wagner.  The house is documented to be older than 1825.  Discover if Lafayette visited this house.

In early May, I shared this top 10 list; i.e. the posts with the most page views from my loyal readers, during April 2014.

A comment by Melissa on a prior post resulted in the Sauer Kraut Clue to my Arsenal Road Quest.  It also earned Melissa a “gold star” on my list of YorksPast history mystery detectives.

Story behind a 4 x 6-feet painting; created in 1969 for the foyer of the Executive Floor of the newly built YORK Headquarters Building along South Richland Avenue.

A comment from reader Gary Wilson about the YORK Flex Coupling and memories of seeing the massive YORK Equipment within the World Trade Center during the 1970s.

The 3-ton Tulips sculpture was installed in the Wynn Theater rotunda in Las Vegas early in 2013, after being acquired for $33,682,500.

One of the fastest growing ways to match historically minded buyers with historic properties is through family ties.  Active listings target each surname in the ownership string.

What do Fire House, Woozy Moose and Casablanca have in Common?

Learn why the Fire House Tavern, Woozy Moose Tavern and Casablanca have an 82-year-old Springettsbury Township fire station in common.