Readers Choose Top 10 Posts during March 2015; Thanks for all your Comments! 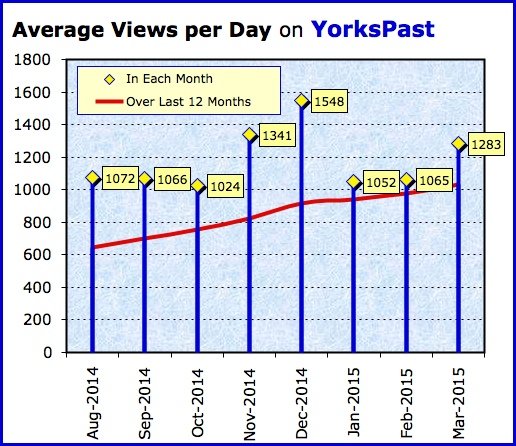 The past month was record breaking in hearing from my readers. I hope to see many of you during my April presentation at the Lancaster Family History Conference.

At the beginning of every month, I’m sharing with my readers the top 10 posts from the previous month. These are your favorites during March 2015:

The first fully enclosed shopping mall in York County opened along East Market Street in Springettsbury Township on October 3, 1968. This post looks back at the sixty earliest stores in the York Mall. Thanks to my readers for providing additional memories; I’ll share them in future posts.

For this 600th YorksPast post, I decided to try something different. I launched “Classics from YorksPast,” where I’m re-issuing posts that were very popular back in the days when my readership was one-tenth of what it is today. The launch turned out quiet well and nice to hear from some new readers who worked at Masell Manufacturing.

This post contains reader’s comments about a previous Mystery One-Room Schoolhouse drawn by Cliff Satterthwaite. Several readers recognized the mystery schoolhouse as Battle Hill School; which was located along Battle Hill Road in Chanceford Township. Reader Eleanor Boggs Shoemaker of Felton provided extensive comments about “city slickers” from the Philadelphia area moving the Rose Tree Hunt Club to the wide-open countryside of York County in the mid 1950s for fox hunting and steeplechase racing. The Rose Tree Hunt Club used the old Battle Hill One-Room Schoolhouse until it burnt down in 1976.

By 1899, the Martin Carriage Works in West York had grown to become the third largest factory employer in all of York County. Milton D. Martin established this company in 1888. This post takes the reader through company highlights until the successor Martin-Parry Corporation moved out of York County in 1946.

The book “Eighteen Years & 82 Days” is filled with memories of the Battle of Okinawa, however it also provides personal experiences of growing up in York during the Great Depression. Among the WWII battles Frank Renda, an armorer in the U.S. Marine Air Corps, took part in, the Battle of Okinawa was the most harrowing. This book makes for a great read; book purchasing & ordering information is provided.

The Shoe House is OPEN

I read that the Haines Shoe House, now selling bakery treats, had opened for the season under new ownership; so I stopped by for a Sunday afternoon snack on my way back from Lancaster. The parking lot was full. People were taking Shoe House tours, getting cones of Beck’s Ice Cream and purchasing treats from Mellie’s Makery. They also have a gift shop, featuring some neat Shoe House t-shirts. This post also explains why I feature the Shoe House in the YorksPast title graphic.

City Directories are excellent sources to discover where your ancestors lived, or where a business was located in the City of York. Using these directories, I’ve seen family histories, where people write, “my grandparents moved down the street in 1899.” However it is easy to get misled, because in some cases they did not move, instead the street address number changed for the same building. In my #1 post, of the top 10 February posts, I explored why, when and how street addresses changed in York.