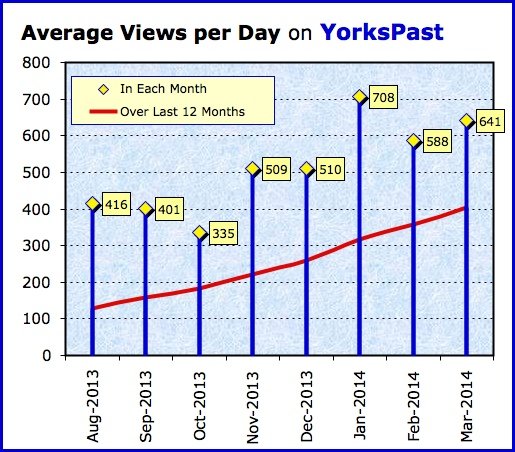 YorksPast started with a post on July 26, 2012, with about 30 views per day during the initial months.  My 400th post milestone was reached last week.  This chart shows the growth of YorksPast readership in recent months; thanks to my ever-growing legion of loyal readers!

At the beginning of every month, I’ve decided to share with my readers the top 10 posts from the previous month.  These are your favorites during March 2014:

In early March, I shared this top 10 list; i.e. the posts with the most page views from my loyal readers, during February 2014.

An introduction to a talk that I’ll be giving on Rail Events in the 1800’s for the Glen Rock Historic Preservation Society on April 22nd, 2014.

In the early morning darkness of Saturday September 16th, 1876, three monster trains, containing 120 railroad cars, pulled into York, Pennsylvania.  Such was the beginning of an eventful day, as P. T. Barnum brought his three-ring circus to town.

Research on Historic Indian Paths of Pennsylvania by Dr. Paul A. W. Wallace shows that the initial location of the Monocacy Path, prior to 1700, began in Conejohela (which is now Native Lands County Park, in the Long Level area) and extended west as a path that became the present East Prospect Road and Mount Rose Avenue; crossing the Codorus Creek where the City of York would be laid out in 1741.

During my involvement with the archeological dig in 2009, I learned about Henry Ford’s interest in purchasing the Schultz House and moving it to Greenfield Village in Michigan.  This post contains the source of the previously undated newspaper clipping.  I also share a copy of the whole article.

Witness Trees provide a living link to the past and gave witness to the surrounding events during their lifetime.  Examples spread from York County to Witness Tree recognition programs throughout the United States.

A suggestion about Henry Ford acquiring the Schultz House, near Camp Security, was offered when I visited Henry Ford’s Greenfield Village.  Some long overdue research tied into comments about my post on Camp Security the previous week; hence the title of this post.

Letters in the Attic, by Cassandra Small; Letter of June 30th, 1863

This second part of Letters in the Attic provides answers inserted between paragraphs of the letter Cassandra Small wrote to Lissie Latimer on June 30th, 1863.

Twenty-five years ago Historic York evaluated the property at 2901 Whiteford Road in Springettsbury Township.  The findings were recorded prior to conversion of the farmhouse into a bank.  The building was classified as a brick Pennsylvania German farmhouse built circa 1755.