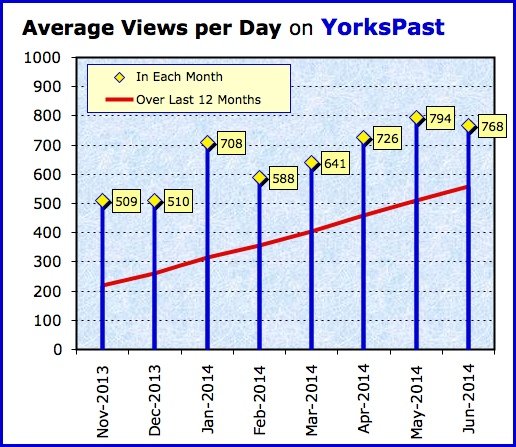 At the beginning of every month, I’m sharing with my readers the top 10 posts from the previous month.  You’re continuing to catch up on reading the past installments of my historical novel, that I post every Thursday; 29 of the top 50 post views were installments of Railcar Gold.  These are your favorites during June 2014:

The ugly cobra lights are gone.  Their hideous orangish-yellow illumination is replaced with a pleasing blanket of white light from the 1930s style lantern lights.  I also summarize the Bridge Names; official and otherwise.

Clock Trickery in Columbia; connection to Steam Into History in New Freedom

One can’t help but think that a wall painting in The National Watch and Clock Museum in Columbia as surreptitiously advertising the Steam Into History train that runs between New Freedom and points north in Southern York County.  Congratulations to Steam Into History on beginning your second year of operation.

End of May, over Ten-Feet of Ice at Lockport along Susquehanna in York County; Connection to Apollo Moon Mission

Before the building of the Safe Harbor Dam in 1931, Lockport was located at rivers edge.  The Safe Harbor Dam is the second dam at this site.  Lockport is now under the Apollo County Park edge of Lake Clarke, however Lockport still appears on current topographic maps.

In early June, I shared this top 10 list; i.e. the posts with the most page views from my loyal readers, during May 2014.

Why is Pennsylvania Governor George Wolf on the cover of the 1933-1934 Directory of the Teachers and School Directors of York County?  The simple answer is in observance of the 100th Anniversary of the Common School Law in Pennsylvania. Governor Wolf’s backing of the unpopular measure led to the establishment of publicly financed grade-school education throughout Pennsylvania.

I utilize Directories of the Teachers and School Directors of York County to compile a list of most of the Stony Brook teachers that taught in this One-Room Schoolhouse located at 101 Locust Grove Road in Springettsbury Township.

Locations of five One-Room Schoolhouses that closed in 1952; and The Avalong Connection

In this post, I show the location of the last five One-Room Schoolhouses that closed in 1952.  I also pinpoint the location where the Springettsbury Township School was built and point out the Avalong connection to the school.