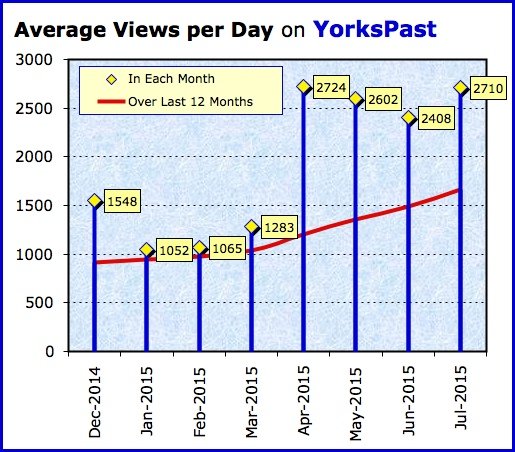 On July 26th, 2015, I began my 4th year of YorksPast. The first three years of YorksPast, represent 653 posts; which averages 4.2 posts per week. Readership remains at record levels. Thanks to everyone for your continuing interest in the subjects I write about.

At the beginning of every month, I’m sharing with my readers the top 10 posts from the previous month. These are your favorites during July 2015:

A Covered Railroad Bridge was once located at the site of today’s Black Bridge; which carries trains over the Codorus Creek as railroad traffic moves between York and Emigsville. The Sixth Annual Report of the Northern Central Railway Company, for the Year 1860, identifies the bridge, at this site, as a Covered Howe Truss bridge. A photo of a Howe Truss Covered Railroad Bridge, from the Library of Congress, is used to more fully describe the Howe Truss design.

In 1825, the majority attitude was, “wood floated and iron sank, why would anybody build a boat out of iron?” However Yorker John Elgar was familiar with the work of Archimedes and knew an iron-hulled boat was possible. The size of the Conewago Canal locks, at York Haven, had a bearing on Elgar’s plan for his boat. Nevertheless, the design of America’s first iron steamboat relied heavily on Elgar’s iron-working expertise and his knowledge of where to obtain quality iron plate.

The end of June marked the third month in a row that YorksPast readership continued at a high level. At the beginning of every month, I share with my readers the top 10 posts from the previous month. This post provides links to those favorites during June.

River Hill One-Room Schoolhouse in East Manchester Township is located near Mt. Wolf at the intersection of Wago Road and Board Road. Elaine Bittner’s query about River Hill complemented some related research I had previously done on this schoolhouse; it made for an interesting post.

Taking off in Philadelphia during 1793, Jean Pierre Blanchard’s balloon flight lasted forty-six minutes, before landing safely in New Jersey. It was the first successful free flight of a balloon in America. President George Washington witnessed the ascension; in fact, he was one of the sponsors of the spectacle.

Neat Photo of House on the Move

In the 1950s, moving a house was a common occurrence in York County. In 1958, this was one of four houses, within a few hundred feet of one another at that location, moved to new foundations rather than being demolished. That was the ultimate form of recycling; saving tons of building materials from ending up in landfills. Check out this post to discover the location of this neat house-on-the-move photo.

Cliff Satterthwaite created murals displayed in the York County Tourist Information Center when it was located along Mt. Zion Road; across from Avalong Farms Dairy Bar. The balloon mural; represented the first aeronaut to soar over York County. James Mills did so on July 25, 1835, taking off from Penn Common in the Borough of York and landing in Lancaster County.

York Diner moves to the Suburbs

This artwork, by Cliff Satterthwaite, shows the York Dutch Restaurant at 2810 East Market Street. It was the third incarnation of Don Sternbergh’s York Diner in the suburbs, after he first established this as the place for “Such Good Food” in downtown York during 1939. This post focuses on the first location in the suburbs, when the York Diner was split into three pieces and trucked out to the 2300 block of East Market Street, near Memory Lane, in Springettsbury Township.

Such Good Food at the York Diner

Cliff Satterthwaite submitted an illustrated story about the various moves of the York Diner. The story was created in 1962, with Don Sternbergh, the owner of the York Diner; after the diner moved to its fourth location. Each panel represents one of those locations. The York Diner was originally located at 37-39 North George Street in Downtown York from 1939 to 1949. That address was one-half way between Philadelphia Street and Clark Avenue; therefore today the steps, front doors and lobby of the York County Judicial Center approximately occupy the same space where the diner sat.

Cliff Satterthwaite created this artwork of the last balloon ascension of Dr. James A. Dale, a wealthy Drug Store owner in York, Pa. The artwork was created in 1970 from an old photo in the collections of the York County Heritage Trust. As far a number of flights, Dr. Dale was the most prolific local aeronaut; his flights in York spanned the years 1869 through 1886. His first flight from Centre Square had him landing near Linglestown, Dauphin County, after being in the air one hour and thirteen minutes.